Items related to Piano Notes: The World of the Pianist 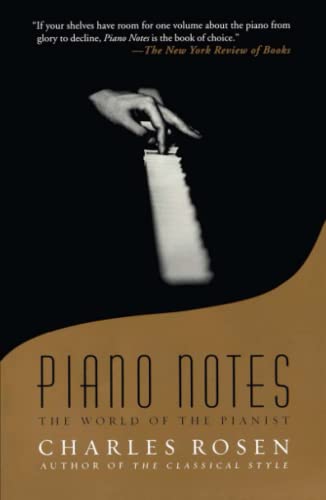 Piano Notes: The World of the Pianist

Title: Piano Notes: The World of the Pianist

Among the world's instruments, the piano stands out as the most versatile, powerful, and misunderstood -- even by those who have spent much of their lives learning to play. In Piano Notes, a finalist for a 2003 National Book Critics Circle Award, Charles Rosen, one of the world's most talented pianists, distills a lifetime of wisdom and lore into an unforgettable tour of the hidden world of piano playing.
You'll read about how a note is produced, why a chord can move us, why the piano -- "hero and villain" of tonality -- has shaped the course of Western music, and why it is growing obsolete. Rosen explains what it means that Beethoven composed in his head whereas Mozart would never dream of doing so, why there are no fortissimos in the works of Ravel, and why a piano player's acrobatics have an important dramatic effect but nothing more. Ending on a contemplative note, Piano Notes offers an elegant argument that piano music "is not just sound or even significant sound" but a mechanical, physical, and fetishistic experience that faces new challenges in an era of recorded music. Rosen ponders whether piano playing will ever again be the same, and his insights astonish.

Charles Rosen is a concert pianist and music critic. He has twice been nominated for the Grammy Award, and his landmark book, The Classical Style, won the National Book Award. He lives in New York City and Paris.