Items related to Comedy Is a Man in Trouble: Slapstick in American Movies 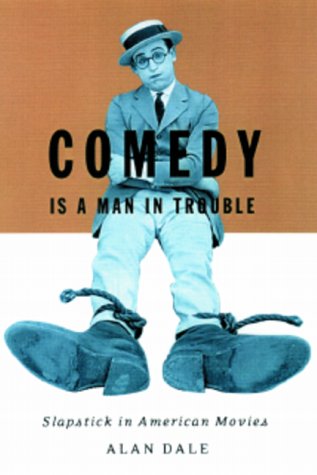 Comedy Is a Man in Trouble: Slapstick in American Movies

Title: Comedy Is a Man in Trouble: Slapstick in ...

An enthusiast's look at American comedies and the physical comedians who made them great.

Legendary screen comedian Jerry Lewis once said, "The premise of all comedy is a man in trouble." The films that endeared Lewis and others to us hinged on the physical assault of their hero, the pie in the face or slip on the banana peel that reduced the movie star to the level of the audience. Comedy Is a Man in Trouble presents the legacy of physical humor from the performances of vaudeville actors and circus clowns-who coined the term "slapstick" by playfully and noisily beating each other with wooden paddles-to its ongoing popularity today in the films of Jim Carrey and the Farrelly brothers.

Alan Dale's personal and passionate tour of movie slapstick begins with an original assessment of the work of famed silent clowns Charlie Chaplin, Harold Lloyd, and Buster Keaton. Dale rejects the long-held notion that the talent of these comedians lies in their ability to combine comedy and tragedy and suggests that their riotous imaginations and their physical grace revealed greatness in comedy for its own sake. A decade later the Marx Brothers exploited the new technology of sound film in their fast-paced verbal exchanges-and, in doing so, invented a verbal form of slapstick later exploited by directors such as Preston Sturges and Howard Hawks. Throughout the 1950s and 1960s, Jerry Lewis energetically revised and combined the physical and verbal humor of his predecessors for a new generation of viewers.

Comedy Is a Man in Trouble presents a lively, accessible, and lavishly illustrated look at a form of comedy that has its origins in ancient Greece and in American vaudeville and has been expanded and refashioned in film by everyone from W. C. Fields and Marion Davies to Katharine Hepburn and Cary Grant. Here is not only an amusing look at film comedy history, but an insight into the human condition and what causes us to laugh.

Alan Dale worked at a Los Angeles talent agency before earning a Ph.D. in comparative literature from Princeton University. He lives in Hoboken, New Jersey.

Dale worked at a Los Angeles talent agency before earning a Ph.D. in comparative literature from Princeton University.