Items related to The Hour I First Believed 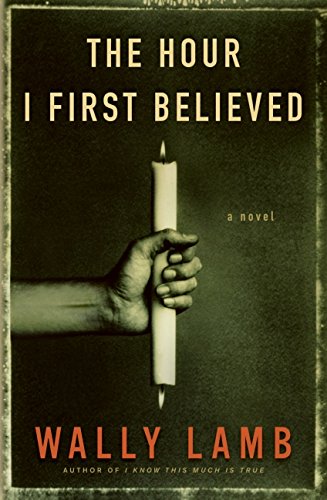 The Hour I First Believed

Quantity: 1
View all  copies of this book
Buy Used
Price: US$ 23.04 Convert Currency
Shipping: US$ 4.79 From Canada to U.S.A. Destination, rates & speeds
Add to basket

Clean Over All With No Marks Folds Or Highlights Inside. In Fine Condition. With A Dust Jacket. The Top Edges Of The Dust Jacket Are Creased. Specially Bound First Edition, Singed Sticker Proclamation At The Front Of The Dust Jacket.- We ship from Canada. Specializing in academic, collectible and historically significant, providing the utmost quality and customer service satisfaction. For any questions feel free to email us. Seller Inventory # 029096

Title: The Hour I First Believed


Wally Lamb's two previous novels, She's Come Undone and I Know This Much Is True, struck a chord with readers. They responded to the intensely introspective nature of the books, and to their lively narrative styles and biting humor. One critic called Wally Lamb a "modern-day Dostoyevsky," whose characters struggle not only with their respective pasts, but with a "mocking, sadistic God" in whom they don't believe but to whom they turn, nevertheless, in times of trouble (New York Times).

In his new novel, The Hour I First Believed, Lamb travels well beyond his earlier work and embodies in his fiction myth, psychology, family history stretching back many generations, and the questions of faith that lie at the heart of everyday life. The result is an extraordinary tour de force, at once a meditation on the human condition and an unflinching yet compassionate evocation of character.

When forty-seven-year-old high school teacher Caelum Quirk and his younger wife, Maureen, a school nurse, move to Littleton, Colorado, they both get jobs at Columbine High School. In April 1999, Caelum returns home to Three Rivers, Connecticut, to be with his aunt who has just had a stroke. But Maureen finds herself in the school library at Columbine, cowering in a cabinet and expecting to be killed, as two vengeful students go on a carefully premeditated, murderous rampage. Miraculously she survives, but at a cost: she is unable to recover from the trauma. Caelum and Maureen flee Colorado and return to an illusion of safety at the Quirk family farm in Three Rivers. But the effects of chaos are not so easily put right, and further tragedy ensues.

While Maureen fights to regain her sanity, Caelum discovers a cache of old diaries, letters, and newspaper clippings in an upstairs bedroom of his family's house. The colorful and intriguing story they recount spans five generations of Quirk family ancestors, from the Civil War era to Caelum's own troubled childhood. Piece by piece, Caelum reconstructs the lives of the women and men whose legacy he bears. Unimaginable secrets emerge; long-buried fear, anger, guilt, and grief rise to the surface.

As Caelum grapples with unexpected and confounding revelations from the past, he also struggles to fashion a future out of the ashes of tragedy. His personal quest for meaning and faith becomes a mythic journey that is at the same time quintessentially contemporary—and American.

The Hour I First Believed is a profound and heart-rending work of fiction. Wally Lamb proves himself a virtuoso storyteller, assembling a variety of voices and an ensemble of characters rich enough to evoke all of humanity.

From the Author: Wally Lamb's Playlist for The Hour I First Believed

I’m often asked what novels by other authors I 'm reading when I’m writing one of my own. The better question is: What and who am I listening to? I’m pleased to share many of the tunes, recognizable and obscure, that helped me write Part I, "Butterfly" of my novel, The Hour I First Believed. I hope you enjoy them.

1. "Gloria," by Van Morrison from The Sopranos - Peppers and Eggs: Music from the HBO Series (Morrison) Caelum saves a slot for Van the Man in his list of “Greatest Songs of the Rock Era.” Morrison had this hit with the band Them in 1964, the year Caelum was 13.

2. "The Meaning of Loneliess," by Van Morrison from Wh at's Wrong with This Picture? (Morrison) In a bluesy mood, now-middle-aged Morrison explores the “existential dread” of life’s second half. Middle-aged Caelum’s pondering life’s meaning, too.

3. "A--hole," by James Luther Dickinson from Free Beer Tomorrow (Unobsky) “Ask any of us cynical bastards to lift up our shirt, and we’ll show you where we got shot in the heart,” says Caelum, as he angrily grieves two failed marriages and a third failing one.

5. "Useless Desires," by Patty Griffin from Impossible Dream (Griffin) Dr. Patel advises Caelum that if he cannot forgive his wife, he should move on. Instead, the Quirks move away from Three Rivers and toward tragedy in Littleton. Griffin’s bittersweet road song captures both the desire for and the futility of escape.

6. "At the Bottom of Everything," by Bright Eyes from I'm Wide Awake, It's Morning (C. Oberst) Conor Oberst (aka Bright Eyes) imagines an airplane ride every bit as strange as the one Caelum takes beside chaos theorist Mickey Schmidt.

7. "House Where Nobody Lives," by Tom Waits from Mule Variations (Waits) In response to his aunt’s stroke, and later, her death, Caelum returns to a now-empty farmhouse.

8. "When God Made Me," by Neil Young from Prairie Wind (Young) Caelum, back in Three Rivers and now in his late forties, contemplates an earlier, more innocent youth--and its loss.

9. "Mbube (The Lion Sleeps Tonight)," by Ladysmith Black Mambazo with Taj Mahal from Long Walk to Freedom (traditional) Mr. Mpipi performs a dance of hunger that turns into a dance of love, and a praying mantis egg case explodes with life on young Caelum’s windowsill.

10. "Believe," by Cher from The Very Best of Cher (B. Higgins/S. McClennan/P. Barry/S. Torch/M. Gray/T. Powell) “Believe” was inescapable in 1999, the year I toured Europe with my previous novel and began this one. The pop star’s durability causes Caelum to speculate that only two life forms would survive a nuclear holocaust: cockroaches and Cher.

11. "My Buddy," by Chet Baker from The Best of Chet Baker Sings (Donaldson/ Kahn) My dad used to sing this song to me when I was a little boy, riding beside him in our green Hudson during Saturday errands. Baker’s songs always makes me sad, but this one’s bittersweet. I played it over and over when I was writing the episode where Caelum’s father drives him to town to buy him his belated Christmas gift.

12. "Mary," by Patty Griffin from Flaming Red (Griffin) When the shooting begins in the Columbine library, Maureen crawls inside a cabinet, writes Caelum a goodbye note, and prays the Hail Mary.

13. "A Case of You," by Prince from < i>A Tribute to Joni Mitchell (Mitchell) This Joni Mitchell classic evokes, for me, the impact of Mo’s Columbine experience on the Quirks’ marriage.

14. "Losing My Religion," by R.E.M. from In Time: The Best of R.E.M 1988-2003 (M. Stipe/P. Buck) How could a merciful deity allow Columbine to happen? Caelum’s ambivalence about god turns to bitter rejection.

15. "Couldn’t Hear Nobody Pray," by Maggie and Suzzy Roche, Ysaye Barnwell, and DuPree from Zero Church (traditional) Disengaged and disspirited, Caelum gropes for a spiritual connection but hears only silence. This song was recorded by vocalists from the Roches and Sweet Honey in the Rock in the aftermath of 9/11/2001. The shadow of that cataclysmic day hung over my writing of this novel for six years.

17. "Hallelujah," by Jeff Buckley from So Real: Songs from Jeff Buckley (L. Cohen) Leonard Cohen’s haunting meditation about the spirit and the flesh has been covered by many artists. The late Jeff Buckley’s version is perhaps the loveliest and most poignant.

Praise for The Hour I First Believed

“Lamb...has delivered a tour de force, his best yet. A”
--Entertainment Weekly

“Lamb, a maestro of orchestrating emotion . . . knows how to make his fans’ hearts sing.”
--Elle

“A page-turner... Lamb remains a storyteller at the top of his game.”
--USA Today

“Every character is rendered with vivid, utterly convincing depth....a heck of a page-turner.”
--Dallas Morning News

“[Lamb’s] pacing is superb: Sections of the story expand to accommodate a mix of characters, yet scenes don’t linger overlong.”
--Cleveland Plain Dealer

“Lamb does an extraordinary job narrating some of the most terrifying tragedies of the past 10 years....an epic journey. Grade: A.”
--Rocky Mountain News

“When you put Lamb’s newest novel down, it will be reluctantly. It’s that good.”
--Knoxville News-Sentinel