Items related to Her Husband: Hughes and Plath-A Marriage 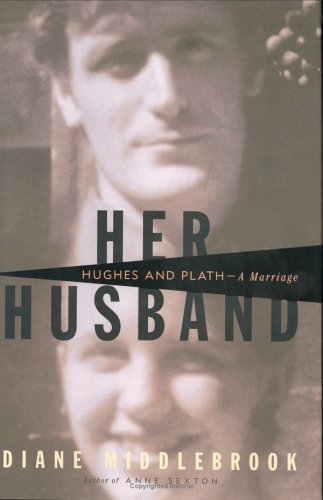 Her Husband: Hughes and Plath-A Marriage

Traces the more than six-year marriage between Ted Hughes and Sylvia Plath, which ended with Plath's suicide, profiling Hughes as a complicated and magnetic figure possessing a shrewd and ambitious business sense, and noting how many blamed him for Plath's death. 75,000 first printing.

Dianne Middlebrook launches Her Husband: Hughes and Plath: A Marriage, appropriately, with the birth of the poets’ lives together. Through her retelling of the historic moment of their first meeting, Middlebrook sets the balanced, literate, and brutally honest tone that she maintains throughout the book. According to Middlebrook, Sylvia Plath and Ted Hughes’s first encounter was violent and almost mythic, punctuated with kisses and biting. In 112 days they were married. Together, as Middlebrook shows, they formed a unique literary bond. They remained aggressive intellectual and erotic partners. But, six years later, Hughes left Plath and their two children for another woman. She committed suicide shortly after, while Hughes would go on to a long and successful career as a poet and as Plath’s literary executor.

What Middlebrook brings to this story, outside of the almost voyeuristic details gleaned from letters, diaries, interviews, and past biographies, is a scholarly commitment to infuse the reading of Hughes and Plath’s marriage with a reading of their poetry and prose. In less capable hands, using literature to reconstruct biography can lead to an undisciplined avoidance of real historical research. But Middlebrook drafts the writings to bolster her understanding of the couple in sophisticated ways that link their private language to their public statements in published works (especially Hughes’ Birthday Letters). At the same time, Middlebrook remains deeply aware that Hughes and Plath worked to re-construct themselves through their writings, often with conflicting self-portraits, for posterity. She is comfortable letting their contradictions exist side by side.

Her Husband is wonderfully told; it is difficult to imagine how this narrative of the marriage could be surpassed. One only hopes that Middlebrook will have the stamina to amend her own work—if necessary—when Hughes’s most private papers are made public in 2023. --Patrick O’Kelley