Items related to Rail, Steam, And Speed: The "rocket" And The...

Home McGowan, Christopher Rail, Steam, And Speed: The "rocket" And The Birth Of Steam ...
Stock Image 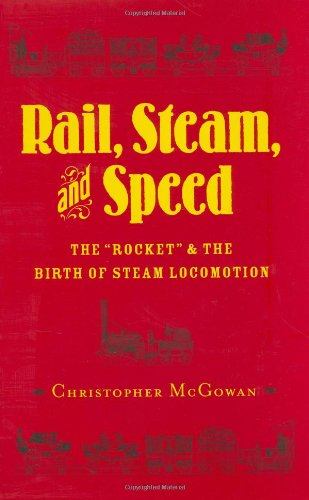 Rail, Steam, And Speed: The "rocket" And The Birth Of Steam Locomotion

Quantity: 2
View all  copies of this book
Buy Used
Price: US$ 7.00 Convert Currency
Shipping: US$ 4.00 Within U.S.A. Destination, rates & speeds
Add to basket

From October 6 through 14, 1829, in a small village just outside Liverpool, England, ten thousand spectators gathered to witness one of the most remarkable events of the Industrial Age: a battle among locomotives that became known as the Rainhill Trials. Five machines were entered in the competition: the horse-powered Cycloped attained a top speed of only five miles per hour, while Perseverence―which looked like a giant iron bottle standing upright atop four wagon wheels―creaked along at a walking pace. But the three-way race between Robert Stephenson's Rocket, Timothy Harworth's Sans Pareil, and the crowd favorite, John Braithwaite and John Ericson's Novelty, astonished the gathered crowds. The unfamiliar clank of machinery, huge billows of steam, and unprecedented speeds of thirty miles per hour thrilled the crowds during the trials'carnival-like atmosphere. The Rocket won the competition, though it had been claimed that the machine was not the superior locomotive. Rail, Steam, and Speed explains why and offers an absorbing account of the trials, people, and science that gave birth to steam locomotion.

The purpose of the trials had been to find a locomotive that could maintain a speed of ten miles per hour for a round trip totaling thirty-five miles, the distance separating Liverpool and Manchester, which were soon to be linked by the world's first passenger railway. But what was achieved during those nine days became a benchmark of the Industrial Revolution. Bringing the excitement of this great drama to life, Christopher McGowan introduces us to such pioneers as George Stephenson, who started as a colliery boy and finished as the father of the railways; John Ericsson, a Swedish Army officer who invented a new kind of locomotive in England but spent most of his life in the United States, where he built the Monitor for the Union Navy; and Richard Trevithick, whose eleven-year adventure in South America included winning and losing several fortunes, deserting Bolivar's army, and escaping the jaws of a crocodile. He encountered George Stephenson's son Robert in a Colombian hotel in one of the most bizarre meetings of the age.

But the real stars are the locomotives themselves. McGowan shows how locomotives work and how they were developed―from the gargantuan beam engines condensing low-pressure steam inside enormous cylinders to the small, high-pressure-driven engines of the maverick miner Trevithick. He adapted the engines to power road carriages, but atrocious roads led him to build an engine that could run on rails. And so was born the world's first steam locomotive and modern transportation.

From October 6 through 14, 1829, a competition was held in Rainhill to find a locomotive that could maintain a speed of ten mph for a round trip totaling thirty-five miles, the distance separating Liverpool and Manchester, which were soon to be linked by the world's first passenger railway. George and Robert Stephenson's Rocket won the competition, but the Rocket was not necessarily the superior locomotive. Rail, Steam, and Speed explains why and offers an absorbing account of the trials, people, and science that gave birth to steam locomotion.