Items related to Marsalis on Music 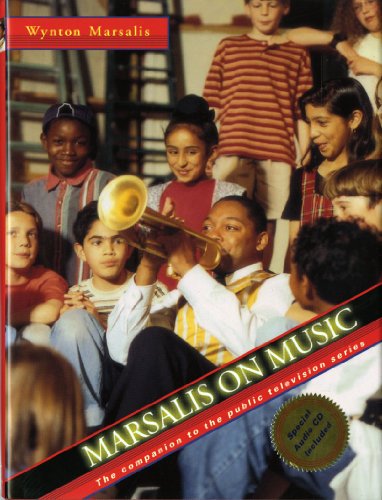 Companion book to the popular PBS-TV series Marsalis on Music, introducing families, children, and music-hungry readers of all ages to the joy of good music, both classical and jazz.

With an unrivaled freshness, charm, and sense of fun, Wynton Marsalis steps forward not only as a world-renowned jazz and classical performer, but as a great teacher in the tradition of Leonard Bernstein's Young People's Concerts.

Using wonderfully appealing examples and analogies―likening the rhythmic structures of music to playing basketball or football, teaching sonata form through a story about chasing a pet hamster through a shopping mall, drawing unprecedented and revealing connections between classical music and jazz―Wynton Marsalis makes so-called "difficult" music vivid, immediately graspable, and most of all fun. The result is the perfect book for families and schools eager to give children a strong cultural foundation without boring them―no risk of that here!―or for anyone who has ever felt interested in "serious" music only to be intimidated by its intricacies.

The most popular and acclaimed jazz musician and composer of his generation, Wynton Marsalis is also one of the world's leading classical trumpet virtuosos. Throughout his career he has made room for extensive work with children and students. He is co-founder and artistic director of Jazz at Lincoln Center. 150 full-color and 110 black-and-white photographs From the Back Cover:

Marsalis on Music, the illustrated companion book-with-CD to Wynton Marsalis's groundbreaking television series, is the perfect introduction to the joy of music, both classical and jazz, for families, young people, and music-hungry readers of all ages. In chapters that correspond to the four one-hour programs in the series, and a Listening Guide and audio CD prepared exclusively for the book, Wynton Marsalis uses wonderfully appealing examples and analogies to communicate the fundamentals of music. Whether likening the rhythmic structures of music to playing basketball, teaching sonata form through a story about chasing a pet hamster through a shopping mall, or revealing the connections between classical music and jazz, Marsalis on Music makes so-called "difficult" music vivid, immediately graspable, and most of all fun. Produced by an Emmy Award-winning team from Sony Classical Film & Video, the television and home video series "Marsalis on Music" was shot at the Tanglewood Music Center with the participation of Seiji Ozawa, Yo-Yo Ma, the Wynton Marsalis Septet, the Liberty Brass Band, the Tanglewood Music Center Orchestra, and an excited audience of young people. Its premiere around the world in 1995 includes broadcasts in the United States, Great Britain, Japan, and Europe.