Items related to Building With Nature: The Development Of The California... 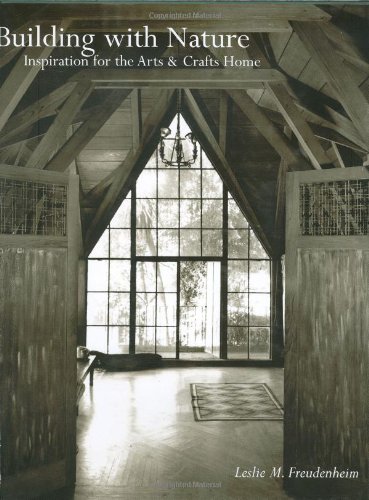 Building With Nature: The Development Of The California Arts & Crafts Home

Quantity: 1
View all  copies of this book
Buy New
Price: US$ 55.00 Convert Currency
Shipping: US$ 9.00 Within U.S.A. Destination, rates & speeds
Add to basket

Title: Building With Nature: The Development Of The...

In "Building with Nature: Inspiration for the Arts & Crafts Home" Freudenheim weaves together the lives and philosophies of William Morris, John Ruskin, Frederick Law Olmsted, John Muir, Greene & Greene, Irving Gill, Bernard Maybeck, and others with the dramatic economic, social, design and cultural changes that took place in America between 1876 and 1916. Chronicling both intellectual theory and architectural history, this ground-breaking book will appeal to general readers as well as to those enthusiastic about the Arts and Crafts Movement, its architecture and furniture.

Freudenheim demonstrates how the "simple life" manifested in the rustic architecture found in Yosemite, English cottages, Japanese barns, and Swiss chalets, became the basis for the design of the American Arts and Crafts home advocated by these pioneering thinkers. Their devotion to simplicity for both the interior and exterior design of these houses also helps to explain why they embraced plain, sturdy Mission Style furniture. Freudenheim points out how numerous individuals, both American and British, helped spread these ideas across America.

Building with Nature charts the influence of Reverend Joseph Worcester of the San Francisco Swedenborgian Church for whom the first Mission Style chair was designed in 1894. The book also shows how Worcester's friends, A. Page Brown, Willis Polk, Bruce Porter, Ernest Coxhead and Bernard Maybeck established the first American Arts & Crafts Society or Guild in 1894. Freudenheim also explores the possible role of A. C. Schweinfurth in the design of the Swedenborgian Church and quotes extensively from Charles Keeler who documented the growth of the Arts & Crafts Movement in the Bay Region.

The book shows how Gustav Stickley found California's architecture so inspiring during his four-month exploration of the state in 1904 that he thereafter promoted numerous versions of the California Arts and Crafts home in Craftsman magazine. In the August 1912 issue Stickley argued: "The value of Western architecture, locally and to the nation at large, and its widening influence upon homebuilding all over the country, are facts not to be estimated lightly...."

Describing the cross-fertilization of American and European ideas, Freudenheim also quotes visitors such as C.R. Ashbee, the English Arts and Crafts architect and founder of the School and Guild of Handicraft in London, who knew the American Arts and Crafts scene well, having traveled in the East and Midwest multiple times from 1896 on. In early 1909, Ashbee visited both Northern and Southern California and enthused: "California speaks.... Here things are really alive--and the Arts and Crafts that all the others were screaming about are here actually being produced...on the Pacific Coast."

Much has been written about the Arts & Crafts spirit of Californians, their appreciation of the land, their desire to build simple yet interesting houses that connect with the outdoors (sleeping porches, gardens, verandas, terraces, and so on), and their love of natural building materials. This revised edition of a foundation classic focuses on the beginnings (1865 and on) of environmentalism and Arts & Crafts collaboration in California, and the origins of the trend toward building simple rustic homes in harmony with nature.

Freudenheim and Sussman explore how and why a small, influential group of Californians (including Joseph Worcester, Bernard Maybeck, Charles Keeler, William Keith, Charles Lummis, A. Page Brown, and others)--all of whom had come from the East or from England--were especially devoted to Ruskin and the Arts & Crafts and how this combined with their dedication to preserve California's natural beauty to create a unique architectural movement.

Building with Nature: Development of the California Arts & Crafts Home presents some revolutionary ideas, including exciting new material on the San Francisco Swedenborgian Church, now a National Landmark and considered to be the model for several lines of Mission-style furniture; new information on the architectural development of Russian hill; and the similarities and differences of the almost simultaneous development of the Arts & Crafts movements in England and the Bay Area. Freudenheim examines how Worcester and his circle encouraged less materialism through architecture that complemented a simpler life in tune with nature, and includes letters from Worcester to his cousin, architect Daniel H. Burnham, along with previously unpublished original documents relating to architectural developments in the Bay Area at the turn of the century.

Leslie Freudenheim, with coauthor Elisabeth Sussman, did pioneering research on the Arts & Crafts movement and its architectural manifestations in the San Francisco Bay region. This collaboration resulted in the publication of Building with Nature: Roots of the San Francisco Bay Region Tradition (Gibbs Smith, Publisher, 1974).

Subsequently, Freudenheim continued her work in architectural history. She wrote a weekly column on architecture and urban affairs for the Baltimore Sun, and contributed to the Washington Post and Museum News. Thereafter she served as Editor of Federal Design Matters for the Design Department, National Endowment for the Arts, and while living in Berlin (1999-2000) wrote on art and architecture for DieWelt and Art News. Since 2001 she has returned to studying the architectural and social roots of the Arts & Crafts movement in California. Freudenheim lives in Washington, D.C.

Elisabeth Sussman is a curator at the Whitney Museum of American Art. Her recent exhibitions and catalogues include Eva Hesse: A Retrospective and Diane Arbus: Revelations (both originated at the San Francisco Museum of Modern Art). Sussman lives in New York City.