Items related to Arafat's War: The Man and His Battle for Israeli... 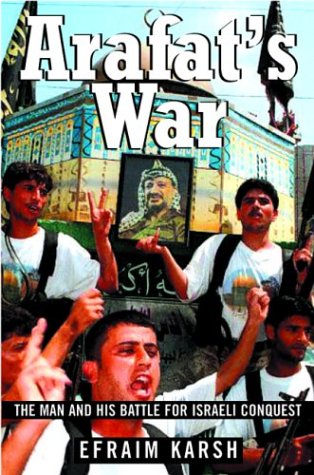 Arafat's War: The Man and His Battle for Israeli Conquest

Title: Arafat's War: The Man and His Battle for ...

A profile of Palestinian leader Yasser Arafat and his role in the Middle East argues that Arafat is less interested in building a Palestinian state or in genuine peace with Israel than he is the destruction of the Israeli state.

In characterizing himself as "the most important person in the Middle-East equation," Yasir Arafat has not given all students of his life reason to rejoice. Far otherwise. The authors of these two books probing Arafat's unlikely career see in his status only a tragically diminished likelihood for regional peace.

In the shorter and more narrowly focused book, Karsh examines Arafat's dubious role in the Palestinian uprising (the al-Aqsa Intifada) that began in September 2000 and has greatly reduced the hopes for peace raised by the Oslo Accords of the 1990s. Adducing compelling evidence, Karsh depicts Arafat as the mastermind who planned the al-Aqsa Intifada--including the suicide bombings, drive-by shootings, and lynchings--long before he found it convenient to describe the orchestrated violence as a spontaneous national response to Ariel Sharon's pre-approved visit to Temple Mount. The al-Aqsa Intifada thus fits into a cynical larger strategy--which Karsh chillingly limns in Arafat's own words--for using peace negotiations as a temporary gambit in enlarging and solidifying the machinery necessary to destroy the state of Israel. Because most Palestinians want peace, Karsh does not blame them for their leader's perfidy. But he does blame Israeli leaders and the international community, accusing them of almost criminal naivete in affording Arafat repeated openings to work his black magic.

Sharp criticism of Israeli and international leaders also frames the much fuller portrait of Arafat offered by the Rubins. Like Karsh, the Rubins portray Arafat as treacherous, tracing his malign influence back much further than the al-Aqsa Intifada, marshalling compelling evidence of Arafat's complicity in numerous earlier atrocities, including the 1972 outrage at the Munich Olympics and the 1985 hijacking of the Achille Lauro. But the Rubins also show how--for all his cunning--Arafat has repeatedly sabotaged his own projects through inexplicable arrogance and tactical foolishness. Yet even when he alienated most Arab leaders by applauding Iraq's 1990 invasion of Kuwait, Arafat managed--yet again--to survive. The Rubins attribute Arafat's staying power to his tyrannical control of all Palestinian institutions and his adept manipulation of Western credulity. Some will disagree with the authors' conclusions about their subject, but there can be no doubt that this "political biography" makes a strong and compelling case for its position. Bryce Christensen
Copyright © American Library Association. All rights reserved