Items related to Hell to Pay 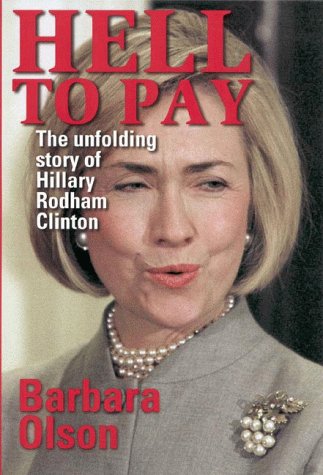 The Unfolding Story of Hillary Rodham Clinton (according to a book that was praised by Rustyh Limbaugh). Seller Inventory # 005540

In Accomplice , Olson separates fact from fiction and shows us Hilllary's often disturbing complicity in her husband's affairs.

Hell to Pay is yet another book on Hillary Rodham Clinton, this time from a conservative lawyer who served as the Republican chief counsel for the congressional committee investigating the Clintons' involvement in "Travelgate" and "Filegate." Barbara Olson traces the now familiar biographies of the president and first lady, contending that Mrs. Clinton is someone with dangerously liberal, even radical, political beliefs who "now seeks to foment revolutionary changes from the uniform of a pink suit." (Olson plays the theme heavily: each chapter of Hell to Pay begins with quotes from Saul Alinsky's Rules for Radicals, which influenced the young Hillary Rodham.)

There are some interesting new tidbits scattered throughout the book, like the fact that after law school Hillary Rodham tried to become a Marine Corps officer but was turned down; or that she told her high school paper her ambition after high school was "to marry a senator and settle down in Georgetown." Olson, attempting to dissect the mystery of the Clinton partnership, writes, "Most self-respecting women would have left" after Clinton's repeated infidelities. "Hillary chose to stay. She behaves as both a desperate lover, and like a frantic campaign manager protecting a flawed candidate.... Hillary, it seems, long ago accepted Bill Clinton as someone who could advance her goals, as a necessary complement to her intellectual cold-blooded pursuit of power." As the Clinton presidency draws to a close, that pursuit has taken her beyond the White House toward a bid for her own U.S. Senate seat. Olson predicts the Senate won't be enough, just the next step toward becoming the first woman president: "Hillary Clinton seeks nothing less than an office that will give her a platform from which to exercise real power and real world leadership." While Olson admits that "Bill Clinton has always excited the greatest passion not among his supporters, but among his detractors," the same could certainly be said of his wife--whose supporters will probably consider Hell to Pay a rehash of a too-familiar story, but whose detractors will no doubt savor every page. --Linda Killian