Items related to The Snakebite Survivors' Club : Travels among Serpents 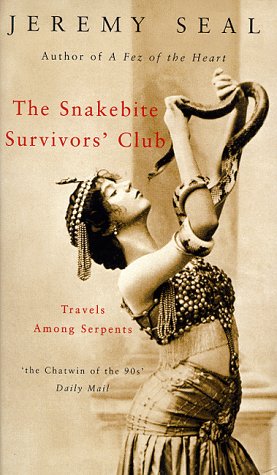 A mix of travel, history and modern fable, with the author travelling to the USA, Africa, Australia and India to meet people living amongst the world's deadliest snakes - and attempting to overcome his personal fear in the process. He weaves a tapestry of snake tales as he confronts his phobia.

Snakes occupy a peculiar position in the human psyche; in different cultures they have been associated with everything from birth to death, with liberal helpings of sex thrown in for good measure. Most of us are both fascinated and repelled by snakes, and Jeremy Seal is no exception. The Snakebite Survivors' Club begins with an account of how he can't bring himself to go into the reptile house at London Zoo. Being a travel writer, Seal is clearly both certifiable and able to spot good copy when he sees it, so he naturally concludes that the only solution is to set off round the world in search of as many lethal snakes and those who have survived their bites as possible. Seal's journeys through America, Africa, Australia, and India are every bit as engaging as you might expect from the man who wrote A Fez of the Heart--a book whose only failing was its badly punning title. Where Seal scores heavily is that he never becomes detached from his subject matter, unlike so many travel writers, who tend to waltz imperiously though foreign parts, affecting an intimacy they never achieve. Even when Seal is talking history, myth, or religion, he's never less than personal.

Seal's interest is more than curiosity, it's phobic--and that's what makes it so compelling. Whether he's meeting the American woman who survived her husband's attempt to murder her with a rattlesnake, or the Kilifi man who survived a black mamba, or the conveniently named Dundee--the Australian who shrugged off a taipan--you can sense his subtext: "What would I have done?" and "Could I have survived?" The same feelings permeate the historical. When he retraces the steps of the first Australian to catch a taipan, you know that he's somehow expecting a snake to appear in the same place. And when it doesn't, like Seal, you are both relieved and disappointed. The Snakebite Survivors' Club is a rare mix of intelligence and whimsy, but don't for a minute think it will cure you of your fear of snakes. So if you're feeling faint-hearted, grab a copy and head for Ireland, where--legend has it--there isn't a snake in sight. --John Crace, Amazon.co.uk