Items related to The Devil Wears Prada A Novel 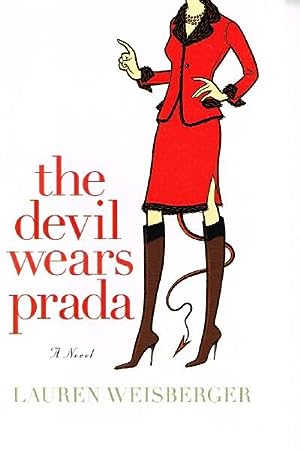 The Devil Wears Prada A Novel

Andrea Sachs, a small-town girl fresh out of college, lands the job “a million girls would die for.” Hired as the assistant to Miranda Priestly, the high-profile, fabulously successful editor of Runway magazine, Andrea finds herself in an office that shouts Prada! Armani! Versace! at every turn, a world populated by impossibly thin, heart-wrenchingly stylish women and beautiful men clad in fine-ribbed turtlenecks and tight leather pants that show off their lifelong dedication to the gym. With breathtaking ease, Miranda can turn each and every one of these hip sophisticates into a scared, whimpering child.

THE DEVIL WEARS PRADA gives a rich and hilarious new meaning to complaints about “The Boss from Hell.” Narrated in Andrea’s smart, refreshingly disarming voice, it traces a deep, dark, devilish view of life at the top only hinted at in gossip columns and over Cosmopolitans at the trendiest cocktail parties. From sending the latest, not-yet-in-stores Harry Potter to Miranda’s children in Paris by private jet, to locating an unnamed antique store where Miranda had at some point admired a vintage dresser, to serving lattes to Miranda at precisely the piping hot temperature she prefers, Andrea is sorely tested each and every day—and often late into the night with orders barked over the phone. She puts up with it all by keeping her eyes on the prize: a recommendation from Miranda that will get Andrea a top job at any magazine of her choosing. As things escalate from the merely unacceptable to the downright outrageous, however, Andrea begins to realize that the job a million girls would die for may just kill her. And even if she survives, she has to decide whether or not the job is worth the price of her soul.

It's a killer title: The Devil Wears Prada. And it's killer material: author Lauren Weisberger did a stint as assistant to Anna Wintour, the all-powerful editor of Vogue magazine. Now she's written a book, and this is its theme: narrator Andrea Sachs goes to work for Miranda Priestly, the all-powerful editor of Runway magazine. Turns out Miranda is quite the bossyboots. That's pretty much the extent of the novel, but it's plenty. Miranda's behavior is so insanely over-the-top that it's a gas to see what she'll do next, and to try to guess which incidents were culled from the real-life antics of the woman who's been called Anna "Nuclear" Wintour. For instance, when Miranda goes to Paris for the collections, Andrea receives a call back at the New York office (where, incidentally, she's not allowed to leave her desk to eat or go to the bathroom, lest her boss should call). Miranda bellows over the line: "I am standing in the pouring rain on the rue de Rivoli and my driver has vanished. Vanished! Find him immediately!"

This kind of thing is delicious fun to read about, though not as well written as its obvious antecedent, The Nanny Diaries. And therein lies the essential problem of the book. Andrea's goal in life is to work for The New Yorker--she's only sticking it out with Miranda for a job recommendation. But author Weisberger is such an inept, ungrammatical writer, you're positively rooting for her fictional alter ego not to get anywhere near The New Yorker. Still, Weisberger has certainly one-upped Me Times Three author Alex Witchel, whose magazine-world novel never gave us the inside dope that was the book's whole raison d' etre. For the most part, The Devil Wears Prada focuses on the outrageous Miranda Priestly, and she's an irresistible spectacle. --Claire Dederer

RARE, BEAUTIFUL & INTERESTING BOOKS. We make every effort to provide quick, accurate, and responsive customer service. All books are described accurately, packaged securely, and shipped promptly. Any book may be returned if you are not completely satisfied. We will be happy to accommodate your special requirements.


We guarantee the condition of every book as it is described on the ABEBooks web sites. If you're dissatisfied with your purchase for any reason you are eligible for a refund within 30 days of the delivery date.


Orders usually ship within two business days. Stated shipping costs are based on books weighing 2.2 LB (1 KG) or less. If your book order is heavy or over-sized, we may contact you to let you know extra shipping is required. INTERNATIONAL CUSTOMERS - PLEASE REMEMBER TO INCLUDE YOUR TELEPHONE NUMBER, AS THIS INFORMATION IS REQUIRED FOR MOST INTERNATIONAL SHIPMENTS.