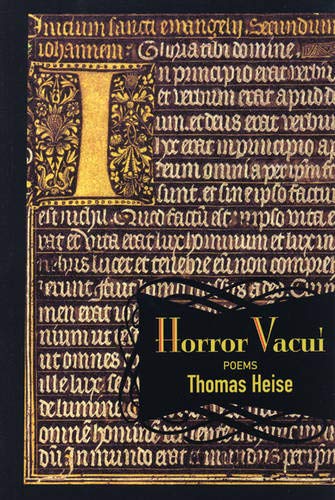 "Horror Vacui offers an often vertiginous account of how death imposes [an] irresistible fact on minds bent on both accommodating and resisting this one inevitable yet impossible truth. . . . And it's this property of being barely held together that makes Horror Vacui so striking. . . . an extraordinary mood piece." Ray McDaniel

In his haunting debut collection Horror Vacui, Thomas Heise explores the fear of empty space, a mysterious and abiding absence that is a pronounced presence in this poet's lyrical voice.

Thomas Heise is the author of Horror Vacui: Poems (Sarabande, 2006), Urban Underworlds: A Geography of Twentieth-Century American Literature and Culture (Rutgers University Press, 2010), and Moth; or how I came to be with you again (Sarabande, 2013). He is an Associate Professor of English at McGill University and divides his time between Montreal and New York City.