Items related to A Simple Monk: Writings on His Holiness the Dalai Lama 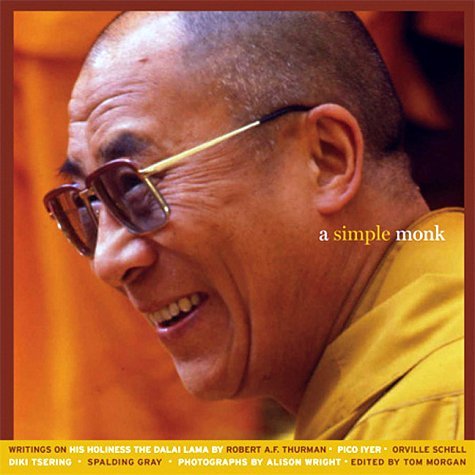 A Simple Monk: Writings on His Holiness the Dalai Lama

Title: A Simple Monk: Writings on His Holiness the ...

Lavish color photographs and wrap-around text celebrate the peripatetic spiritual leader of Tibetan Buddhism. Unidentified contributors present such perspectives as ocean of wisdom, the god in exile, and human rights and universal responsibility. There is no index or bibliography. Annotation c. Book News, Inc., Portland, OR (booknews.com)

The regal gift anthology A Simple Monk stands apart from the glut of books about the 14th Dalai Lama. Alison Wright's glorious photographs deliver a visual feast of the landscape and people of Tibet, as well as the face of the Dalai Lama--all of which contain an inspiring blend of serenity and joy against a backdrop of political suffering. Like the photography, the six essays educate readers while avoiding hyperbole and guru worship. One of the most compelling contributions comes from the Dalai Lama's mother, Diki Tsering, who speaks of her son with frank authority. Who would have thought that this peaceful monk was once a 1-year-old tyrant? When he toddled upon people quarreling, he'd pick up a stick and "try to beat them," according to his mother. In straightforward prose, she also recounts the many omens and coincidences that pointed to her son being the next Dalai Lama. Other essays include an interview conducted by Spalding Gray, in which the Dalai Lama speaks of his daily meditation practice (from 4 to 8 a.m.), how he overcomes fear of terrorism and flying, and how he resists the allure of bikini-clad women at the swimming pool. --Gail Hudson