Items related to Key Moments in Fashion: The Evolution of Style

Home No Author Key Moments in Fashion: The Evolution of Style
Stock Image 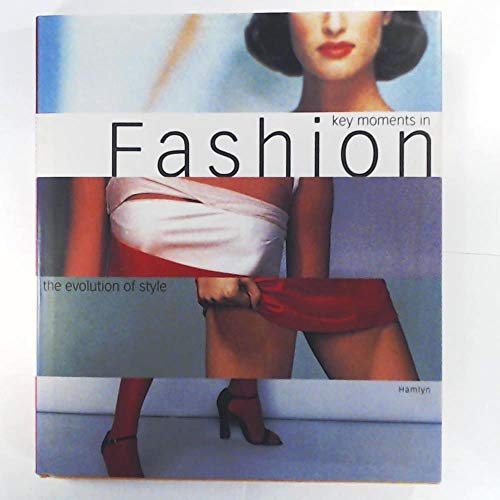 Key Moments in Fashion: The Evolution of Style

Title: Key Moments in Fashion: The Evolution of ...

All in color! Become fashion forward by flashing back to the major figures, crucial moments, and items of clothing that not only influenced the way we dressed, but helped define the mood of the times and changed the course of style forever. Marvel over dozens of stunning garments on page after page of superb photographs and drawings as you go beyond the glossy faade of the industry to uncover what it is about this distinguished list that has shaped attitudes and fashion through the 20th century. The house of Worth, the fathers of couture; Vogue

magazine; Chanel and sunbathing; women in trousers; photographer Man Ray; Dior's "New Look"; Mary Quant and the miniskirt; Studio 54 and club chic; the trainer as fashion footwear--all have made a mark on the way we dress today. Trim size: 9 3/4 x 11 1/4.

Citing the rise of couture houses such as Worth and Dior as well as the development of trade journals like Vogue, the authors of this British publication aim to show how these and other global events influenced the fashion world during the last century. A diverse collection of journalists and fashion industry insiders, Crawford and his fellow writers illustrate influences as varied as the World Wars, motion pictures, pop icons (think Marlon Brando and the biker image, Marlene Dietrich and man-tailored trousers, Madonna, and Princess Di), the hippie movement, the disco scene, and punk culture. Chapters with provocative titles such as "The Birth of the Bra" prove that, yes, even undergarments have all contributed to an industry that consumers eagerly embrace. The text of this book is quite readable, the photographs--all in color and accompanied by informative captioning--are great, and the price is affordable. The only drawback is the lack of an index, but most patrons probably won't mind. Recommended for general collections.
-Margarete Gross, Chicago P.L.
Copyright 2000 Reed Business Information, Inc.