Items related to Robo Sapiens: Evolution of a New Species 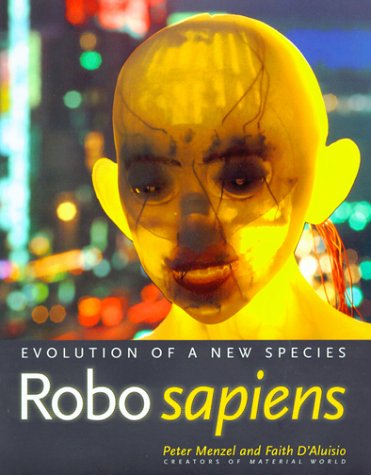 A field guide to our mechanical future, presenting the next generation of intelligent robots and their makers.

Around the world, scientists and engineers are participating in a high-stakes race to build the first intelligent robot. Many robots already exist―automobile factories are full of them. But the new generation of robots will be something else: smart machines that act like living creatures. When they are brought into existence, science fiction will have become fact.

What will happen then? With our prosthetic limbs, titanium hips, and artificial eyes, we are already beginning to resemble our machines. Equally important, our machines are beginning to resemble us. Robots already walk, talk, and dance; they can react to our facial expressions and obey verbal commands. When they take the next step and become fully autonomous, what will they do? Will we be partners or rivals? Could we meld into a single species―Robo sapiens?

In Robo sapiens, Peter Menzel and Faith D'Aluisio present the next generation of intelligent robots and their makers. Accompanying brilliant photographs of more than one hundred robots is an account of the little-known, yet vitally important scientific competition to build an autonomous robot. Containing extensive interviews with robotics pioneers, anecdotal "field notes" with behind-the-scenes information, and easy-to-understand technical data about the machines, Robo sapiens is a field guide to our mechanical future.

If you believe the children are our future, you're only half right. Photographer Peter Menzel and journalist Faith D'Aluisio traveled around the world interviewing researchers who want to jump-start our evolution by designing and building electrical and mechanical extensions of ourselves--robots. Their book, Robo Sapiens, takes its title from the notion that our species might somehow merge with our creations, either literally or symbiotically. The photography is brilliant, showing the endearing and creepy sides of the robots and roboticists and feeling like stills from unmade science-fiction films. D'Aluisio's interviews are insightful and often very funny, as when she calls MIT superstar Rodney Brooks on his statement that we ought not "overanthropomorphize" people. Brooks is an interesting study. Having shaken up the robotics and artificial-intelligence fields with his elimination of high-level intelligence and dedication to tiny, insectoid, built-from-the-ground-up robots, he now works on large, human-mimicking machines. But hundreds of other researchers, in Japan, Europe, and the United States, are working on various aspects of machine behavior, from the eerily lifelike robotic faces of Fumio Hara and Alvaro Villa to the monkeylike movement of Brachiator III; each of them casts a bit of light on the future of their field in their short interviews. Though it's clear that we shouldn't hold our breath waiting for a robot butler, Robo Sapiens suggests that much cooler--and stranger--events are coming soon. --Rob Lightner