Items related to Lowly Origin: Where, When, And Why Our Ancestors First...

Home Kingdon, Jonathan Lowly Origin: Where, When, And Why Our Ancestors First Stood Up
Stock Image 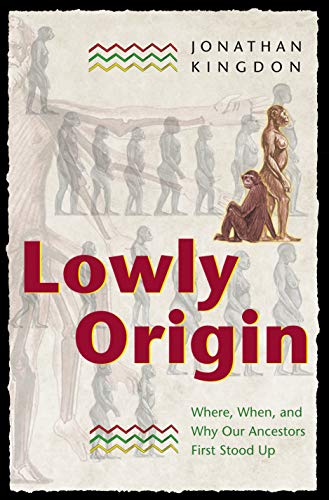 Lowly Origin: Where, When, And Why Our Ancestors First Stood Up

Quantity: 1
View all  copies of this book
Buy Used
Price: US$ 6.98 Convert Currency
Shipping: US$ 5.00 Within U.S.A. Destination, rates & speeds
Add to basket

Our ability to walk on two legs is not only a characteristic human trait but one of the things that made us human in the first place. Once our ancestors could walk on two legs, they began to do many of the things that apes cannot do: cross wide open spaces, manipulate complex tools, communicate with new signal systems, and light fires. Titled after the last two words of Darwin's Descent of Man and written by a leading scholar of human evolution, Lowly Origin is the first book to explain the sources and consequences of bipedalism to a broad audience. Along the way, it accounts for recent fossil discoveries that show us a still incomplete but much bushier family tree than most of us learned about in school.

Jonathan Kingdon uses the very latest findings from ecology, biogeography, and paleontology to build a new and up-to-date account of how four-legged apes became two-legged hominins. He describes what it took to get up onto two legs as well as the protracted consequences of that step--some of which led straight to modern humans and others to very different bipeds. This allows him to make sense of recently unearthed evidence suggesting that no fewer than twenty species of humans and hominins have lived and become extinct. Following the evolution of two-legged creatures from our earliest lowly forebears to the present, Kingdon concludes with future options for the last surviving biped.

A major new narrative of human evolution, Lowly Origin is the best available account of what it meant--and what it means--to walk on two feet.

"Jonathan Kingdon's work is one of the things that make the present day such an exciting time for anyone with the slightest intellectual curiosity. His subject matter is our profound and thrilling human origins, and his stance toward it makes his work unique and priceless. Not only is Kingdon a scientist of commanding authority, he is an artist whose hand transmits his knowledge through drawings so swift and graceful that revelation and admiration arrive together. His wonderful new book takes a characteristically original look at one of the things that makes us human: our walking on two legs. There is no one alive who could do it better."--Philip Pullman, author ofThe Amber Spyglass

"Jonathan Kingdon is a Living World Treasure. One of Africa's greatest zoological artists, he is also one of zoology's leading authorities on Africa's mammals. A world class zoologist, ecologist, and writer, he also thinks deeply about human prehistory and evolution. Bipedality is humanity's founding peculiarity. Lowly Origin is Kingdon's highly original take on how it came about, and he manages to broaden his canvas to accommodate all of human evolution. An artist with words and a poet with images, only Jonathan Kingdon could have written this book."--Richard Dawkins, University of Oxford, Fellow of the Royal Society

"This well-written book offers new insights into the biogeographic and ecological influences on human evolution and helps us make sense of the fossil record."--Colin P. Groves, Australian National University

"Kingdon has made a unique contribution to the field of mammalian evolution and African ecology, both in his writing and in his art. His approach to human evolution, with its focus on the natural history of people and animals, is very special and important."--Robert A. Foley, University of Cambridge