Items related to Bait And Switch: The (Futile) Pursuit of the American... 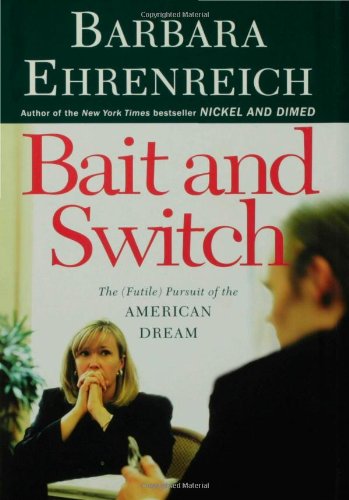 Bait And Switch: The (Futile) Pursuit of the American Dream

Title: Bait And Switch: The (Futile) Pursuit of the...

Barbara Ehrenreich’s Nickel and Dimed explored the lives of low-wage workers. Now, in Bait and Switch, she enters another hidden realm of the economy: the shadowy world of the white-collar unemployed. Armed with a plausible résumé of a professional “in transition,” she attempts to land a middle-class job—undergoing career coaching and personality testing, then trawling a series of EST-like boot camps, job fairs, networking events, and evangelical job-search ministries. She gets an image makeover, works to project a winning attitude, yet is proselytized, scammed, lectured, and—again and again—rejected.

Bait and Switch highlights the people who’ve done everything right—gotten college degrees, developed marketable skills, and built up impressive résumés—yet have become repeatedly vulnerable to financial disaster, and not simply due to the vagaries of the business cycle. Today’s ultra-lean corporations take pride in shedding their “surplus” employees—plunging them, for months or years at a stretch, into the twilight zone of white-collar unemployment, where job searching becomes a full-time job in itself. As Ehrenreich discovers, there are few social supports for these newly disposable workers—and little security even for those who have jobs.

Like the now classic Nickel and Dimed, Bait and Switch is alternately hilarious and tragic, a searing exposé of economic cruelty where we least expect it.

Through over three decades of journalism and activism and over a dozen books, Barbara Ehrenreich has been one of the most consistent and imaginative chroniclers of class in America, but it was her bestselling 2001 book, Nickel and Dimed, a undercover expose of the day-to-day struggles of the working poor, that has been the most influential work of her career. Now, with Bait and Switch, she has gone undercover again, this time as a middle-aged professional trying to get a white-collar job in corporate America. We asked her a few questions about what she found:

Amazon.com: Your previous book, Nickel and Dimed, became a blockbuster bestseller with a classic "there but for the grace of God go I" liberal message just when the general political mood of the country seemed to be going in a very different direction. Why do you think it struck such a chord? What sorts of reactions have you gotten to it over the past four years?

Barbara Ehrenreich: A lot of Nickel and Dimed readers are people who regularly inhabit the low-wage work world, and many of them write to tell me that the book affirmed their experience and made them feel less alone and ignored. Other readers though, are affluent people who write to say I opened their eyes to a world they'd been unaware of. For those people, I think one appealing feature of Nickel and Dimed is that it's a personal narrative that gives them a look at lives lived at the margins of their own. The most gratifying response has been from people who tell me the book inspired them to become activists for things like a living wage or affordable housing.

Ehrenreich: My initial aim was not "to tell a story of working in corporate America" but to try to understand the human underside of corporate America--the job insecurity, the constant layoffs and downsizings that now occur even in the best of times. I expected to get a job and hence an inside view, but I always knew that that would be very difficult. After about 4-5 months of job searching, I began to get seriously discouraged, but I also came to understand that a fruitless search is in fact a very common experience. After all, today 44 percent of the long-term unemployed are white collar folks--an unusually high percentage. It's their world I entered, and their story that I tell in Bait and Switch.

Amazon.com: For someone with a white-collar career, you didn't have much experience in corporate culture before you attempted to join it for this book. What surprised you the most about what you found?

Ehrenreich: What surprised me most, right from day one of my job search, was the surreal nature of the job searching business. For example, everyone, from corporations to career coaches, relies heavily on "personality tests" which have no scientific credibility or predictive value. One test revealed that I have a melancholy and envious nature and, for some reason, was unsuited to be a writer! And what does "personality" have to do with getting the job done, anyway? There's far less emphasis on skills and experience than on whether you have the prescribed upbeat and likeable persona. I kept wondering: Is this any way to run a business? I was also surprised--and disgusted--by the constant victim-blaming you encounter among coaches, at networking events for the unemployed, and in the business advice books. You're constantly told that whatever happens to you is the result of your attitude or even your "thought forms"--not a word about the corporate policies that lead to so much turmoil and misery.

Amazon.com: You seemed to make much closer ties with your fellow workers in Nickel and Dimed than you did on the white-collar job hunt. What was different this time?

Ehrenreich: You're right--there is a difference. But it's not so much a matter of personalities as it is about two different worlds. There's a lot of camaraderie in the blue-collar world I entered in Nickel and Dimed. People help each other and look out for each other; they laugh together--often at the managers. The white-collar world doesn't encourage camaraderie, far from it. There it's all about competition and fear--of losing one's job, for one thing. Other people are seen as sources of contacts or tips, at best; as competitors or rivals, at worst. And among the unemployed add shame and a sense of personal failure, the constant message that it's all your own fault. All this discourages any solidarity with others or real openness.

Amazon.com: God forbid anyone would come to your book as a guide for finding a white-collar job, but what advice would you give to someone in the shoes you put yourself in: a middle-aged professional woman, in fear of falling irrevocably out of touch with the world of the regularly employed?

Ehrenreich: You don't think I'd make a good career coach? OK, but I have three pieces of advice for the middle-aged, middle-class job seeker anyway:

One, be very careful how you spend your money and time. Since the mid-90s, a whole industry has sprung up to help--or, depending on your point of view, prey upon--white-collar job seekers. The "professionals" in this business are usually entirely unlicensed and unregulated. Also, watch out for events billed as "networking" opportunities that really have another agenda--like recruiting you into expensive coaching or proselytizing you into a particular religion.

Two, don't count on the internet job sites to find you a job or even an interview. On any of these sites, your resume will be competing with hundreds of thousands of others, and most large companies today don't even bother reading online resumes; they have computer programs scan them for keywords (and you won't know what those keywords are.)

Three, and most important: stop believing that it's your own fault. That's the first step to recognizing the common problems facing white-collar workers and responding to them. I'd be thrilled if this book, like Nickel and Dimed, also inspires readers to get involved and become active in efforts to make life a little easier for the growing numbers of people who are unemployed, underemployed, or anxiously employed. What could they do? Lobby for universal health insurance that's not tied to a job, for example. Fight for extended unemployment benefits. Raise their voices to complain about corporate tax breaks and subsidies that are justified in terms of "job creation" but often go to companies that are busy laying people off. One major reason job loss is so catastrophic is that we just don't have much of a safety net in this country. That has to change, and who's going to make it change, if not people like those I met in Bait and Switch? I've got a new website, barbaraehrenreich.com, and I'd like to hear from readers--both their stories and their ideas for how to take action.