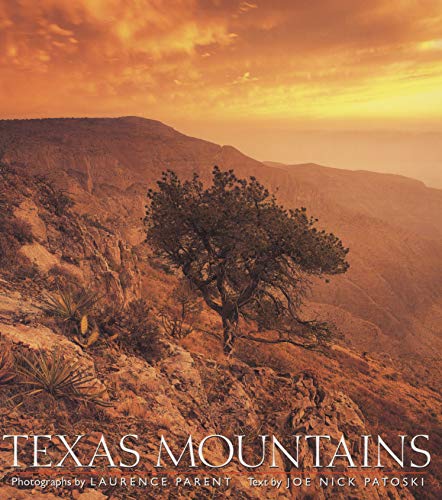 Quantity: 1
View all  copies of this book
Buy Used
Price: US$ 7.59 Convert Currency
Shipping: US$ 5.00 Within U.S.A. Destination, rates & speeds
Add to basket

Some of the most beautiful views in Texas are also the most remote. Seemingly endless miles lie between the isolated mountain ranges of the Trans-Pecos and the more populous parts of Texas and New Mexico, ensuring that only those who really crave the solitude, rugged loveliness, and hundred-mile vistas of the mountains will ever make the trek.

In this book, Laurence Parent and Joe Nick Patoski join forces to offer breathtaking views of the Texas mountains. With magnificent images and words, they take us on a journey not only through the familiar Guadalupe, Davis, and Chisos mountains, but also through lesser-known ranges with evocative names such as Sierra Diablo, Eagle, Chinati, Beach, and Christmas.

Capturing the Texas mountains from first light to the glowing rays of sunset and from winter snows to summer droughts, Parent's photographs reveal many hidden treasures—pine forests, waterfalls, old forts, aspens, movie sets, Indian pictographs, and red-rock pinnacles. Patoski's text ranges as widely as the photos, using places from Marathon to El Paso's Franklin Mountains as starting points for "field notes" that explore the myriad ways in which the land has shaped and been shaped by the people who live on it. For everyone who longs for mountain views and wide-open spaces, Texas Mountains comes as close to being there as you can get without endless driving.

Laurence Parent is a freelance photographer and writer in Austin, Texas, whose work has appeared in Texas Highways, Texas Monthly, Texas Parks and Wildlife, and many other publications.