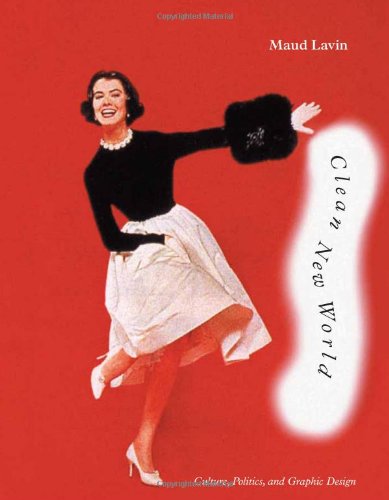 Quantity: 1
View all  copies of this book
Buy Used
Price: US$ 10.00 Convert Currency
Shipping: US$ 4.25 Within U.S.A. Destination, rates & speeds
Add to basket

Our culture is dominated by the visual. Yet most writing on design reflects a narrow preoccupation with products, biographies, and design influences. Maud Lavin approaches design from the broader field of visual culture criticism, asking challenging questions about about who really has a voice in the culture and what unseen influences affect the look of things designers produce. Lavin shows how design fits into larger questions of power, democracy, and communication. Many corporate clients instruct designers to convey order and clarity in order to give their companies the look of a clean new world. But since designers cannot clean up messy reality, Lavin shows, they often end up simply veiling it.

Lacking the power to influence the content of their commercial work, many designers work simultaneously on other, more fulfilling projects. Lavin is especially interested in the graphic designer's role in shaping cultural norms. She examines the anti-Nazi propaganda of John Heartfield, the modernist utopian design of Kurt Schwitters and the neue ring werbegestalter, the alternative images of women by studio ringl + pit, the activist work of such contemporary designers as Marlene McCarty and Sheila Levrant de Bretteville, and the Internet innovations of David Steuer and others. Throughout the book, Lavin asks how designers can expand the pleasure, democracy, and vitality of communication.

Clean New World is a somewhat disjointed collection of essays that promises a fresh take on an old dilemma: graphic designers provide the glossy public face of big corporations but are not permitted (or motivated) to reveal the messier realities that underpin public power. Beginning with the exception that proves the rule--the leftist photomontages made by John Heartfield in Weimar Germany--Maud Lavin segues to such contemporary themes as corporate identity work, political art coalitions, and the role of advertising in the U.S. abortion debate. Along the way, the author spotlights women in graphic design who balance bread-and-butter clients with more personally meaningful work and discusses how Web design can make users feel "controlled or in control." The final chapter deals with the cathartic effect a Web-based "soap opera" had on its creators, an eight-writer team that included the author, a faculty member at the School of the Art Institute of Chicago.

Maxims pronounced by the gurus of graphic design tend to go unchallenged by practitioners in the field, so you want to cheer Lavin when she butts heads with received wisdom, including Paul Rand's belief that simplicity in design is inherently "truthful." As she points out, the striated logo Rand designed for IBM in 1956 does not reflect some indisputable fact about this corporate behemoth. The reality is just the reverse--corporations seek to cloak themselves in the clean, bright look of good design. But the author's arguments can lack rigor. For example, she discusses how former CBS creative director William Golden teamed up in the '50s with artist Ben Shahn to develop advertisements for a documentary program. Lavin lauds these ads as "humanistic" without stopping to consider the inherent qualities of illustrations in graphic design and the preconceptions evoked by Shahn's well-known style. Several of these essays were originally given as lectures, which might account for their underwhelming effect on the printed page. But why not stretch out and delve deeper when you have a whole book to play with? --Cathy Curtis

Book'em is a used bookstore in Port Orchard, Washington. We carry fiction, non-fiction, hard cover, paper backs, classics, out of print pocketbooks, and a large selection of children's books. We have over 75,000 + books in stock


We accept money orders, checks, Paypal and Visa or Mastercard. Please call 360 874-0841 or order by mail if using your credit card. Books will be held for 14 days upon receipt of request. A book will be shipped upon receipt of payment. Shipping charges are $4.00 for the first book and $2.00 for each additional book (if shipped within the U.S.) Books are returnable for a full refund within 10 business days if they are not in the condition as described. Overseas shipping is $10.00 air mail and mor...