Items related to One Woman's Army: The Commanding General of Abu... 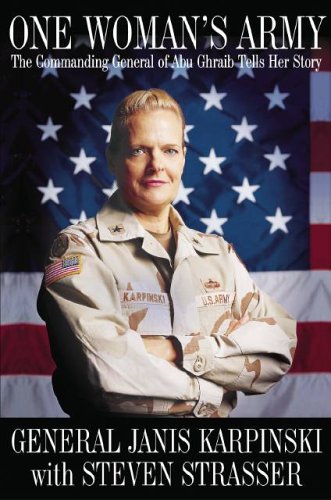 One Woman's Army: The Commanding General of Abu Ghraib Tells Her Story **Signed**

Quantity: 1
View all  copies of this book
Buy Used
Price: US$ 28.00 Convert Currency
Shipping: US$ 5.00 Within U.S.A. Destination, rates & speeds
Add to basket

Signed To Bob - Thank you for your support and your interest in the truth, Courage always. by Author on the title page - signature only. A First edition, First printing. Book is in Near Fine condition. Boards are clean, not bumped. Interior is clean and legible. Not remaindered. Dust Jacket is in Near Fine condition. Not chipped or crinkled. Not price clipped. Dust Jacket is covered by Mylar Brodart. All-Ways well boxed, All-Ways fast service. Thanks. Seller Inventory # 018353

Title: One Woman's Army: The Commanding General of ...

In an ouspoken memoir that is sure to generate controversy, General Janis Karpinski tells the real story of the tragic and shameful events of 2004 from her first-hand experience.

Karpinski had a long, distinguished career in the military: she received a Bronze Star for her service in the Gulf War, and most recently, served as the Commander of the Military Police Brigade and was the first and only female General Officer commanding troops in a combat zone in Iraq. And although she had no training in handling criminal prisoners, she was selected to run Abu Ghraib.

In One Woman's Army, Karpinski takes us inside the prison walls and describes unflinchingly what it was like to interact with the Iraqi prisoners, the corruption within the armed forces and the accompanying private firms, and her meeting with Saddam Hussein, who refused to believe that a woman could be in charge. She talks about what life is really like for women in the armed forces and the tremendous obstacles she has faced.

Co-written with Newsweek correspondent Steven Strasser, she forcefully argues that the bulk of the blame for the Abu Ghraib scandal goes to the very top of the chain of command -- to Lieutenant General Sanchez; Ambassador Bremer; Secretary of Defense Donald Rumsfeld -- and tells why she has been made a scapegoat. Hers is a story of military leaders run amok, and a moving portrait of a woman who spent her life defying the odds in pursuit of her dream.

General Janis Karpinski served in the military for over 25 years. She was an Intelligence Commander in Iraq and the only female commander to serve there in the Army Reserves. She attended West Point and the US Army War College, and served in the first Gulf War where she received a Bronze Star. She grew up in New Jersey, and has been married for 30 years to a Lieutenant-Colonel in the army. This is her first book.
Co-writer Steven Strasser is an author and a foreign correspondent for Newsweek. He currently teaches journalism at Rutgers University and lives in Manhattan.