Items related to Most Wanted Man in America **Signed** 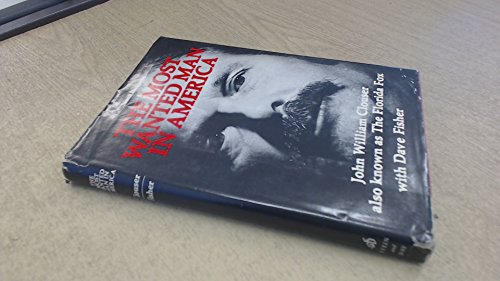 Most Wanted Man in America **Signed**

Quantity: 1
View all  copies of this book
Buy Used
Price: US$ 38.00 Convert Currency
Shipping: US$ 5.00 Within U.S.A. Destination, rates & speeds
Add to basket

Signed by Jack Clouser "The Florida Fox " on the front free end page. First edition, First printing. Book is in Near Fine condition. Boards have a tiny bit of shelf wear/rub. Fore edges have a small amount of reading wear/foxing. Interior is clean and legible. Not remaindered. Dust Jacket is in Near Fine condition. Tiny bit of chip and crinkle along the edge. Not price clipped. Dust Jacket is covered by Mylar wrapper. All-Ways well boxed, All-Ways fast service. Thanks. Seller Inventory # 018161

With the esprit of an Errol Flynn, he played as hard as he worked, made love to countless women in 44 states and 11 foreign countries, and there was only one problem. Jack Clouser was a fugitive from the law. He was a young and quickly successful Detective Sergeant on the Orlando, Florida police fore when he got into trouble. Sentenced to 30 years' imprisonment for an armed robbery he swears he did not commit, Jack Clouser managed his escape in 1964. In 1965 he was captured by the FBI, but almost immediately escaped again. Of the 56,000 fugitives in America, only ten at a time make the FBI's Most Wanted List, and Jack got on it - and stayed on it -longer than any an in history: nine years. When he surrendered in August of 1974, the 'Today Show' recorded it for millions of Americans to witness. Jack Clouser, who eluded the police for ten years and four months, had turned himself in, saying he was self-rehabilitated and ready to prove it.What happened in those ten years, now recorded in this book, shows the techniques used by this record-breaking fugitive for hiding out in America, how he taunted J. Edgar Hoover, how he got new identities (complete with social security card) time and again, how he disguised himself without make-up so that his own roommates wouldn't recognize him from a "Ten Most Wanted" poster, how he developed techniques for avoiding suspicion, the skill it took - and the pride it brought - to evade the top law enforcers, and become America's most successful fugitive.