Items related to Wind, Sand, and Silence: Travels With Africa's... 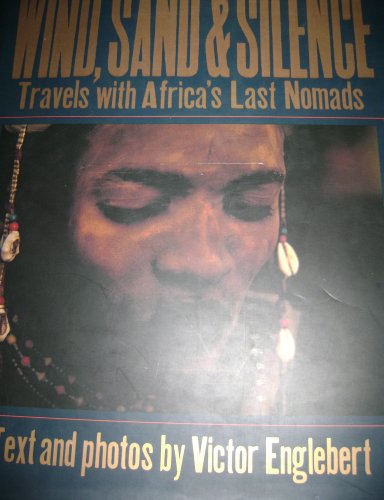 Quantity: 1
View all  copies of this book
Buy Used
Price: US$ 14.50 Convert Currency
Shipping: US$ 3.50 Within U.S.A. Destination, rates & speeds
Add to basket

Wind, Sand, & Silence is an extraordinary photographic document by world traveler/photographer Victor Englebert. Over a period of twenty-six years - from 1965 to 1991 - Englebert lived and traveled with the nomads of Africa. While accompanying them on their journeys across the vast African terrain, or simply living with them in their camps, Englebert captured stunning images of their daily lives amid the barren beauty of their surroundings.
Englebert journeyed across the spectacular Sahara with two men from the Tuareg tribe; he joined a salt caravan traveling on camelback through the Tenere, a desert within the Sahara and one of the bleakest places on earth; he lived with the shy, gentle, and elusive Bororo, whose only wish is to be beautiful and to dance every day; he traveled with the Danakil who, until recently, considered it their duty to kill intruders; and he lived with the fiercely independent Turkana, who are in constant conflict with other nomads over scarce pasture and water on the fringes of their territory.
This personal, anecdotal account of Englebert's travels is a captivating story, a documentary of a way of life that is quickly disappearing, and a moving record of a noble and exotic culture.

This is a throwback to a type of book popular in the 19th century, when seemingly every traveler or missionary who had spent time in Africa wrote a book about life there. Back then, such books were illustrated with line drawings and prints. Englebert's volume, which focuses on four nomadic peoples of Africa's desert regions, instead presents numerous color photographs of peoples and landscapes. Unfortunately, the book suffers from many of the same problems of its 19th-century predecessors. The text, essentially a traveler's journal, at times becomes tediously trivial . It also expresses an overly romantic view of African life, reveals a limited understanding of African realities, and presents what passes as ethnographic information in a disjointedly anecdotal manner. While it is interesting as an adventurer's memoirs and as an impressionistic view of Africa's nomads, this book's usefulness to African and ethnographic studies is very limited.
- Dr. Eugene C. Burt, Seattle
Copyright 1992 Reed Business Information, Inc.