Items related to Super Bowl of Advertising, The: How the Commercials...

Home Kanner, Bernice Super Bowl of Advertising, The: How the Commercials Won the Game
Stock Image 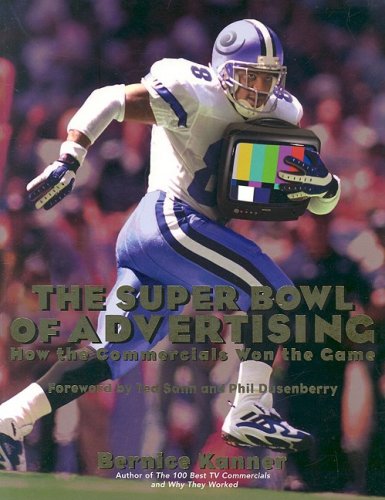 Super Bowl of Advertising, The: How the Commercials Won the Game

Title: Super Bowl of Advertising, The: How the ...

The Super Bowl is not just the crowning glory of football. It is the ultimate arena for advertising-- the most watched, most anticipated, most expensive, most influential venue for major-league television commercials. It is the place for advertisers to be seen and to showcase their best work to some 800 million viewers around the world and is of intense interest to advertising, marketing, and branding professionals. Many tune in just for the ads, which cost millions to produce and air. From the Bud Bowl and "Whassup?" to "Mean" Joe Greene and Michael Jordan, the commercials have tickled the nation's funny bone and tugged at its heartstrings. The commercial spectacle has grown in magnitude along with the same itself to become an integral part of the annual event. This book is a tour of that advertising evolution--nothing the triumphs and embarrassing flops, lassoing behind-the-scenes stories of ads that are significant--because they broke new ground, inaugurated a major campaign, defined a new movement, set a milestone, or reflected life t the time in a unique way. Illustrated throughout with color stills from the commercials, "The Super Bowl of Advertisingwill bring back memories and remind us of how, for many, the commercials are the best part of the game.

Bernice Kanner is a marketing expert with Bloomberg L.P., a columnist for "ScreamingMedia", and a regular contributor to Oxygen.com. She has appeared as a marketing expert on "CBS Morning News," ABC, and ESPN, and from 1981 through 1994 she wrote the award-winning "On Madison Avenue" column appearing in "New York Magazine."