Items related to Reading Lolita in Tehran: A Memoir in Books 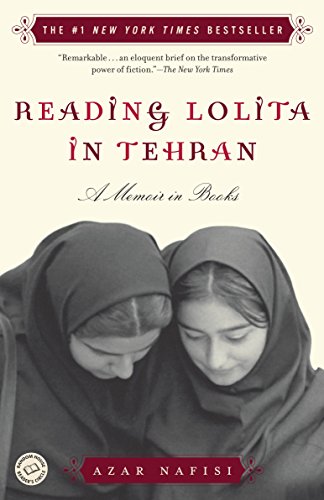 Reading Lolita in Tehran: A Memoir in Books

Title: Reading Lolita in Tehran: A Memoir in Books

Every Thursday morning for two years in the Islamic Republic of Iran, a bold and inspired teacher named Azar Nafisi secretly gathered seven of her most committed female students to read forbidden Western classics. As Islamic morality squads staged arbitrary raids in Tehran, fundamentalists seized hold of the universities, and a blind censor stifled artistic expression, the girls in Azar Nafisi’s living room risked removing their veils and immersed themselves in the worlds of Jane Austen, F. Scott Fitzgerald, Henry James, and Vladimir Nabokov. In this extraordinary memoir, their stories become intertwined with the ones they are reading. Reading Lolita in Tehran is a remarkable exploration of resilience in the face of tyranny and a celebration of the liberating power of literature.

An inspired blend of memoir and literary criticism, Reading Lolita in Tehran is a moving testament to the power of art and its ability to change and improve people's lives. In 1995, after resigning from her job as a professor at a university in Tehran due to repressive policies, Azar Nafisi invited seven of her best female students to attend a weekly study of great Western literature in her home. Since the books they read were officially banned by the government, the women were forced to meet in secret, often sharing photocopied pages of the illegal novels. For two years they met to talk, share, and "shed their mandatory veils and robes and burst into color." Though most of the women were shy and intimidated at first, they soon became emboldened by the forum and used the meetings as a springboard for debating the social, cultural, and political realities of living under strict Islamic rule. They discussed their harassment at the hands of "morality guards," the daily indignities of living under the Ayatollah Khomeini's regime, the effects of the Iran-Iraq war in the 1980s, love, marriage, and life in general, giving readers a rare inside look at revolutionary Iran. The books were always the primary focus, however, and they became "essential to our lives: they were not a luxury but a necessity," she writes.

Threaded into the memoir are trenchant discussions of the work of Vladimir Nabokov, F. Scott Fitzgerald, Jane Austen, and other authors who provided the women with examples of those who successfully asserted their autonomy despite great odds. The great works encouraged them to strike out against authoritarianism and repression in their own ways, both large and small: "There, in that living room, we rediscovered that we were also living, breathing human beings; and no matter how repressive the state became, no matter how intimidated and frightened we were, like Lolita we tried to escape and to create our own little pockets of freedom," she writes. In short, the art helped them to survive. --Shawn Carkonen