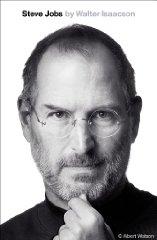 Quantity: 1
View all  copies of this book
Buy New
Price: US$ 101.75 Convert Currency
Shipping: US$ 28.62 From United Kingdom to U.S.A. Destination, rates & speeds
Add to basket

Based on more than forty interviews with Jobs conducted over two years—as well as interviews with more than a hundred family members, friends, adversaries, competitors, and colleagues—Walter Isaacson has written a riveting story of the roller-coaster life and searingly intense personality of a creative entrepreneur whose passion for perfection and ferocious drive revolutionized six industries: personal computers, animated movies, music, phones, tablet computing, and digital publishing.

At a time when America is seeking ways to sustain its innovative edge, and when societies around the world are trying to build digital-age economies, Jobs stands as the ultimate icon of inventiveness and applied imagination. He knew that the best way to create value in the twenty-first century was to connect creativity with technology. He built a company where leaps of the imagination were combined with remarkable feats of engineering.

Although Jobs cooperated with this book, he asked for no control over what was written nor even the right to read it before it was published. He put nothing off-limits. He encouraged the people he knew to speak honestly. And Jobs speaks candidly, sometimes brutally so, about the people he worked with and competed against. His friends, foes, and colleagues provide an unvarnished view of the passions, perfectionism, obsessions, artistry, devilry, and compulsion for control that shaped his approach to business and the innovative products that resulted.

Driven by demons, Jobs could drive those around him to fury and despair. But his personality and products were interrelated, just as Apple’s hardware and software tended to be, as if part of an integrated system. His tale is instructive and cautionary, filled with lessons about innovation, character, leadership, and values.

Amazon Best Books of the Month, November 2011: It is difficult to read the opening pages of Walter Isaacson’s Steve Jobs without feeling melancholic. Jobs retired at the end of August and died about six weeks later. Now, just weeks after his death, you can open the book that bears his name and read about his youth, his promise, and his relentless press to succeed. But the initial sadness in starting the book is soon replaced by something else, which is the intensity of the read--mirroring the intensity of Jobs’s focus and vision for his products. Few in history have transformed their time like Steve Jobs, and one could argue that he stands with the Fords, Edisons, and Gutenbergs of the world. This is a timely and complete portrait that pulls no punches and gives insight into a man whose contradictions were in many ways his greatest strength. --Chris Schluep

Q: It's becoming well known that Jobs was able to create his Reality Distortion Field when it served him. Was it difficult for you to cut through the RDF and get beneath the narrative that he created? How did you do it?

Isaacson: Andy Hertzfeld, who worked with Steve on the original Macintosh team, said that even if you were aware of his Reality Distortion Field, you still got caught up in it. But that is why Steve was so successful: He willfully bent reality so that you became convinced you could do the impossible, so you did. I never felt he was intentionally misleading me, but I did try to check every story. I did more than a hundred interviews. And he urged me not just to hear his version, but to interview as many people as possible. It was one of his many odd contradictions: He could distort reality, yet he was also brutally honest most of the time. He impressed upon me the value of honesty, rather than trying to whitewash things.

Q: How were the interviews with Jobs conducted? Did you ask lots of questions, or did he just talk?

Isaacson: I asked very few questions. We would take long walks or drives, or sit in his garden, and I would raise a topic and let him expound on it. Even during the more formal sessions in his living room, I would just sit quietly and listen. He loved to tell stories, and he would get very emotional, especially when talking about people in his life whom he admired or disdained.

Q: He was a powerful man who could hold a grudge. Was it easy to get others to talk about Jobs willingly? Were they afraid to talk?

Isaacson: Everyone was eager to talk about Steve. They all had stories to tell, and they loved to tell them. Even those who told me about his rough manner put it in the context of how inspiring he could be.

Q: Jobs embraced the counterculture and Buddhism. Yet he was a billionaire businessman with his own jet. In what way did Jobs' contradictions contribute to his success?

Isaacson: Steve was filled with contradictions. He was a counterculture rebel who became a billionaire. He eschewed material objects yet made objects of desire. He talked, at times, about how he wrestled with these contradictions. His counterculture background combined with his love of electronics and business was key to the products he created. They combined artistry and technology.

Q: Jobs could be notoriously difficult. Did you wind up liking him in the end?

Isaacson: Yes, I liked him and was inspired by him. But I knew he could be unkind and rough. These things can go together. When my book first came out, some people skimmed it quickly and cherry-picked the examples of his being rude to people. But that was only half the story. Fortunately, as people read the whole book, they saw the theme of the narrative: He could be petulant and rough, but this was driven by his passion and pursuit of perfection. He liked people to stand up to him, and he said that brutal honesty was required to be part of his team. And the teams he built became extremely loyal and inspired.

Q: Do you believe he was a genius?

Isaacson: He was a genius at connecting art to technology, of making leaps based on intuition and imagination. He knew how to make emotional connections with those around him and with his customers.

Q: Did he have regrets?

Isaacson: He had some regrets, which he expressed in his interviews. For example, he said that he did not handle well the pregnancy of his first girlfriend. But he was deeply satisfied by the creativity he ingrained at Apple and the loyalty of both his close colleagues and his family.

Q: What do you think is his legacy?

Isaacson: His legacy is transforming seven industries: personal computers, animated movies, music, phones, tablet computing, digital publishing, and retail stores. His legacy is creating what became the most valuable company on earth, one that stood at the intersection of the humanities and technology, and is the company most likely still to be doing that a generation from now. His legacy, as he said in his "Think Different" ad, was reminding us that the people who are crazy enough to think they can change the world are the ones who do.

Alpha 2 Omega Books: We are an independent on-line bookseller, based near Southampton, Hampshire in the South of England, with approximately 8,000 books - first editions, scarce, hard to find, out-of-print, as well as brand new. We specialise in biographies, autobiographies, literature & fiction, rare and collectable books. We have been in business for more than 15 years with many satisfied customers. We are a member of The Booksellers Association.


Shipping cost is additional to the book price.Orders usually ship within 2
business days. Shipping costs are based on books weighing 2.2 LB, or 1 KG. If
your book order is heavy or oversized, we may contact you to let you know extra
shipping is required.

We offer FREE Delivery to UK for all orders (UK addresses only), including
Channel Islands and Isle of Man. All books shipped within the UK are sent via
Royal Mail or Parcel Force.

If you require an urgent delivery, we offer Express Delivery Service, via Royal
Mail Special Delivery Next Day, at a cost.
High value books will be shipped in UK via Recorded Delivery or Special Delivery
Next Day, or via Parcel Force.
All international sales sent via Royal Air Mail or courier.