Items related to Smoke and Mirrors: Violence, Television, and Other... 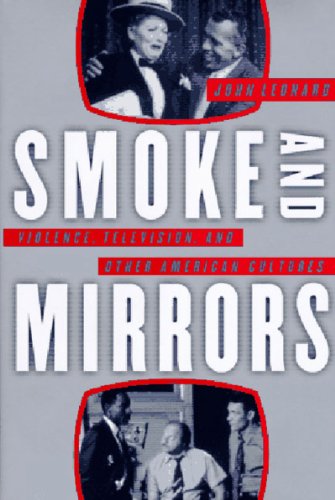 Smoke and Mirrors: Violence, Television, and Other American Cultures

Instead of making a scapegoat of television as the cause of crime on the streets of the USA, stupidity in its schools, and spectacle rather than substance in its government, this challenge to conventional ideas about television sees inside the box an echo chamber and a feedback loop; a medium neither wholly innocent of, nor entirely responsible for, the disorder it brings to people's homes.

You can't find a smarter, more savvy, and learned couch potato than John Leonard, the literary editor of The Nation and television critic for New York magazine and CBS Sunday Morning. In the pages of Smoke and Mirrors he accomplishes something close to the unthinkable: he creates a convincing case for the merits of our collective viewing habits through thoughtful essays on what television tells us about ourselves. At times Leonard's knowledge of television programming can be overwhelming, as he clicks through the history of long-canceled programs with a frightening intimacy. In contrast to real T.V., Leonard always offers up something worth tuning into. He treats our tired, media-saturated eyes to such topics as what detective programs reveal about out confidence in the individual, how our sense of national coherence has fractured into multitudinous channels of individual identity, and what talk shows express about the need for a collective legitimation. Leonard's arguments might not always sway the reader, but unlike the boob tube, he rarely disappoints.