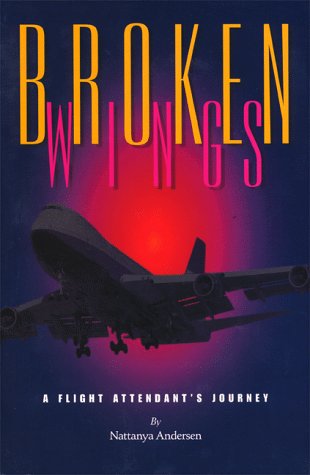 Quantity: 1
View all  copies of this book
Buy Used
Price: US$ 8.95 Convert Currency
Shipping: US$ 6.00 From Canada to U.S.A. Destination, rates & speeds
Add to basket

Nattanya Andersen's cherished career as a flight-attendant for one of the world's largest airlines careened to a halt, when a jet-engine-explosion five feet away from her at 6000 feet altitude shortly after take-off left her with post-traumatic-stress-disorder (PTSD). The mental health professions' apparent lack of knowledge concerning the treatment of PTSD-sufferers and Nattanya's desire to help herself lead her to search for empirical studies on PTSD and other health-issues and dangers facing air-crew--and by extension their passengers--on a daily basis. In Broken Wings Nattanya documents the symptoms and repercussions of PTSD and portrays the treatment an injured-at-work employee, in particular if ill with PTSD, can expect to receive from the employer, the Workers' Compensation Board, and the Union. Interwoven with her struggle against the system are chapters about air-rage, air-quantity and quality in aircraft-cabins; airplanes as illness-incubators; cosmic-radiation-exposure; turbulence; air-traffic-control; pilot-training; flight-phobia and anxiety, and air-crew-duty-times, all backed up by data from dozens of scientific studies. Nattanya also gives us insight into the air-crew-lifestyle, the role of flight-attendants, and passengers' on-board behavior. But Broken Wings is not just about the aviation-industry, and it is not just dry facts and figures. It is a story about fear, betrayal and the phoenix-like rebirth of a soul from the moment of the accident to the time when Nattanya emerges as a complete - albeit scarred - person from a situation which came close to breaking her. It is an utterly compelling story, even for readers who have no interest in the airline-industry. In light of the September 11, 2001 events and the regularly occurring aircraft-crashes and incidents worldwide leaving uncounted numbers of passengers and crew with PTSD, "Broken Wings" indeed makes timely and gripping reading.

Nattanya holds a Bachelor of Arts degree (1993) from Simon Fraser University (Burnaby, B.C., Canada). Her second non-fiction and again meticulously researched book describing the steps she took leading to her Post Traumatic Stress Disorder recovery will be published in the autumn of 2017.