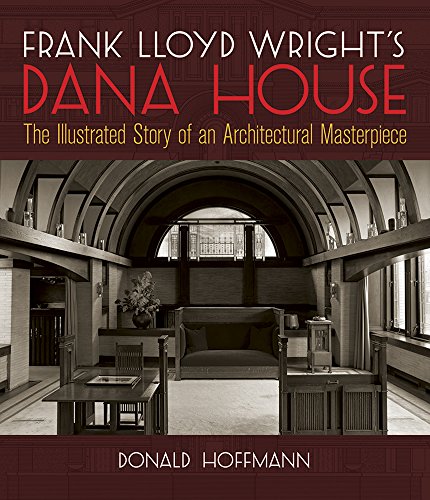 "Mr. Hoffmann's magisterial command of the vast Wright literature is matched by his gift for placing the architect in the broader cultural crosscurrents of his time ... long a respected Wright authority, [he is in] the very forefront of his peers."—The New York Times
Built in Springfield, Illinois, in 1902–04 for socialite Susan Lawrence Dana, the lavish home known as the Dana House was designed for extensive entertaining and for housing the owner's art collection. The house was the largest and most ornamental residence Frank Lloyd Wright had constructed up to that time.
The lines, dynamic structure, decorative sculpture, and a thousand other felicities of this magnificent house are captured here in a handsome pictorial essay by noted architectural historian Donald Hoffmann. More than 160 rare photographs and line drawings—including interior and exterior views, plans, elevations, sketches, and studies—clearly document Wright's residential masterpiece. The informative and perceptive text discusses the history and background of the house; its site, plans, and construction; the elements and principles underlying its design, and many other aspects of the home's creation.

American architect Frank Lloyd Wright (1867–1959) designed more than 1,000 structures in a career that spanned eight decades. A leader of the Prairie School of architecture, he also designed interiors, wrote 20 books, and was a popular lecturer.

We are an online internet bookstore. Although we maintain a broad general collection, we have a concentration of material on the American Southwest and Indians of North America, both history and literature. Digital photos on request. Email (s.armstrong.books@gmail.com)or phone (530 279-2190).


We also accept checks and money orders in US funds. Feel free to email or phone to confirm availability. Reserved items will be held for 10 days. Guaranteed returnable within 10 days of receipt, with phone or email notification, well packed and with delivery confirmation. (The following is information for "European Union Requirements Affecting USA Sellers." My name is Sara E. Armstrong. My business is operated as a sole proprietorship and is named "Sara Armstrong - Books." I live on County Road ...