Items related to This Far by Faith: Stories from the African American... 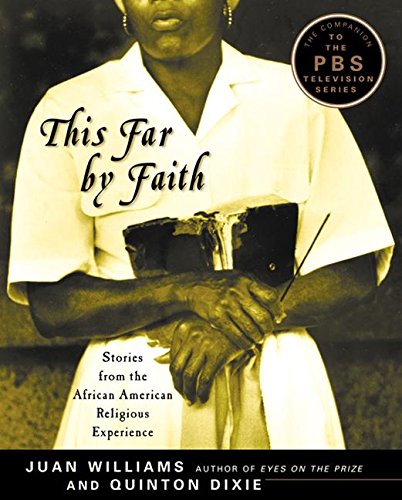 This Far by Faith: Stories from the African American Religious Experience

Quantity: 1
View all  copies of this book
Buy Used
Price: US$ 8.00 Convert Currency
Shipping: US$ 3.50 Within U.S.A. Destination, rates & speeds
Add to basket

Title: This Far by Faith: Stories from the African ...

This Far by Faith is the story of how religious faith inspired the greatest social movement in American history -- the U.S. Civil Rights movement.

America's struggle, rise, and triumph from slavery to equal rights for all is a living testament to the power of deep, personal faith for Americans of all colors. The black experience in America, even black music, is defined by a steady, burning religious faith and the power it offered to people who were viewed as powerless, even less than human, until the flame of faith showed them that they were equal members of God's family. That everlasting faith in God and trust in God's justice, as well as the power of prayer and its appeals to conscience, remains central to the concept of democracy and one nation under God that all Americans value.

Arriving on ships named Brotherhood and John the Baptist, slaves who had previously embraced tribal religions in their home countries faced the Christianity of their captors. Africans did not simply adopt the religion of the European colonists; they used the power, principles, and practices of Christianity to blaze a path to freedom and deliverance. In the process, the moral fabric of the nation was tested and took on a new texture and strength unique to America.

In the early to mid-twentieth century, black people used organized faith to meet, finance, and plan their struggle for freedom. The church was a living well of strength and comfort for black Americans; the one place where they maintained their public dignity. It was the black church that produced civil rights leaders from Martin Luther King Jr. to Malcolm X. And the white churches and synagogues provided key allies that were necessary to boost the Civil Rights movement to success.

Juan Williams, author of Eyes on the Prize, the landmark book on the history of the Civil Rights movement, and Quinton Dixie, a professor of religious studies and African American studies at Indiana University, bring to life the pivotal moments facing men and women of faith in this monumental history. The stories begin with ministers leading rebellions against slavery and towering men and women who used faith in God to rise above the brutality of being demeaned as slaves. Here are stories of politics, tent revivals, and the importance of black churches as touchstones for every step of the faith journey that became the Civil Rights movement of the 1950s and 1960s.

Using archival and contemporary photography, historical research, and modern-day interviews, and featuring messages from some of today's foremost clergymen and women, This Far by Faith is the first in-depth treatment of this social history and a companion to a major public television series.

Juan Williams is the author of the acclaimed PBS series companion volume Eyes on the Prize. He is a senior correspondent for NPR, political analyst for Fox News, and the host of America's Black Forum. Williams worked at the Washington Post for twenty-three years as a columnist, editorial writer, and White House correspondent. He has won an Emmy Award for his television documentary writing and has contributed features to Fortune, Atlantic Monthly, Ebony, GQ, New Republic, and Black Issues Book Review. He is a graduate of Haverford College in Pennsylvania.