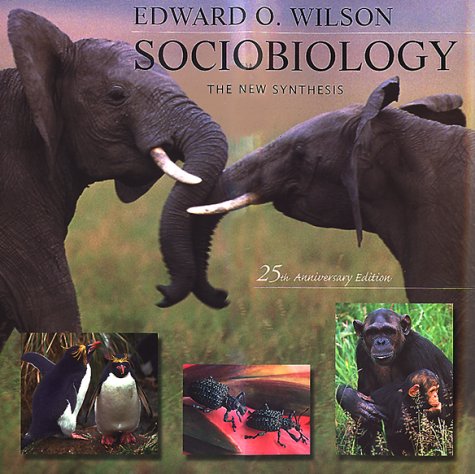 Quantity: 1
View all  copies of this book
Buy Used
Price: US$ 80.00 Convert Currency
Shipping: US$ 5.00 Within U.S.A. Destination, rates & speeds
Add to basket

Harvard University Press is proud to announce the re-release of the complete original version of Sociobiology: The New Synthesis--now available in paperback for the first time. When this classic work was first published in 1975, it created a new discipline and started a tumultuous round in the age-old nature versus nurture debate. Although voted by officers and fellows of the international Animal Behavior Society the most important book on animal behavior of all time, Sociobiology is probably more widely known as the object of bitter attacks by social scientists and other scholars who opposed its claim that human social behavior, indeed human nature, has a biological foundation. The controversy surrounding the publication of the book reverberates to the present day.

In the introduction to this Twenty-Fifth Anniversary Edition, Edward O. Wilson shows how research in human genetics and neuroscience has strengthened the case for a biological understanding of human nature. Human sociobiology, now often called evolutionary psychology, has in the last quarter of a century emerged as its own field of study, drawing on theory and data from both biology and the social sciences.

For its still fresh and beautifully illustrated descriptions of animal societies, and its importance as a crucial step forward in the understanding of human beings, this anniversary edition of Sociobiology: The New Synthesis will be welcomed by a new generation of students and scholars in all branches of learning.

E.O. Wilson defines sociobiology as "the systematic study of the biological basis of all social behavior," the central theoretical problem of which is the question of how behaviors that seemingly contradict the principles of natural selection, such as altruism, can develop. Sociobiology: A New Synthesis, Wilson's first attempt to outline the new field of study, was first published in 1975 and called for a fairly revolutionary update to the so-called Modern Synthesis of evolutionary biology. Sociobiology as a new field of study demanded the active inclusion of sociology, the social sciences, and the humanities in evolutionary theory. Often criticized for its apparent message of "biological destiny," Sociobiology set the stage for such controversial works as Richard Dawkins's The Selfish Gene and Wilson's own Consilience.

Sociobiology defines such concepts as society, individual, population, communication, and regulation. It attempts to explain, biologically, why groups of animals behave the way they do when finding food or shelter, confronting enemies, or getting along with one another. Wilson seeks to explain how group selection, altruism, hierarchies, and sexual selection work in populations of animals, and to identify evolutionary trends and sociobiological characteristics of all animal groups, up to and including man. The insect sections of the books are particularly interesting, given Wilson's status as the world's most famous entomologist.

It is fair to say that as an ecological strategy eusociality has been overwhelmingly successful. It is useful to think of an insect colony as a diffuse organism, weighing anywhere from less than a gram to as much as a kilogram and possessing from about a hundred to a million or more tiny mouths.

It's when Wilson starts talking about human beings that the furor starts. Feminists have been among the strongest critics of the work, arguing that humans are not slaves to a biological destiny, forever locked in "primitive" behavior patterns without the ability to reason past our biochemical nature. Like The Origin of Species, Sociobiology has forced many biologists and social scientists to reassess their most cherished notions of how animals work. --Therese Littleton