Items related to The Genuine Article

Home Guthrie, Jr., A. B. The Genuine Article
Stock Image 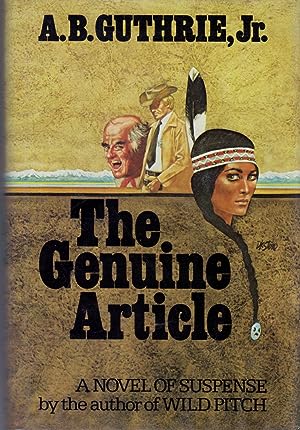 Not many people in Midbury especially liked F. Y. Grimsley, a rancher with twenty thousand acres and five hundred head of cattle. Still, when Grimsley is found dead on his back doorstep with a mysterious gash on his head, Chief Chick Charleston and his crew have to use their dusty detective skills to root out his killer. They are aided by Deputy Jason Beard, who, though he grew up in Midbury, has been away for two years at college, waiting to go out into the â real world.â Â In their small Montana community, Charleston and Beard must conduct their investigations delicately, ignoring local prejudice, sifting through gossip and speculation, enduring the pressures of higher-ups, dealing with some less-than-savory characters, and eliciting information from those who would prefer not to talk. And, not surprisingly, things get worse before they get better. A second body is discovered, and relations between the sheriff, the Indian reservation, and the town deteriorate until finding the murderer becomes more than just a matter of enforcing the lawâ it becomes crucial to keeping the peace in this small ranching community.Â With an entertaining cast of characters and a vivid sense of Montana ranch land, The Genuine Article is a page-turning mystery of surprising warmth and humor. (20100701)

A. B. Guthrie Jr. (1901–91) was a historian and novelist whose 1949 book The Way West won the Pulitzer Prize for fiction. He is the author of several other western mysteries, including Wild Pitch, No Second Wind, Playing Catch-Up, and Murder in the Cotswolds, all soon to be available in Bison Books editions.


Check with order or credit card (Visa, Mastercard, Discover or American Express). Books may be
returned within ten days of receipt for any reason. Minnesota residents add
6.875% sales tax. Fireproof Books is a sole proprietorship. The business address
is 13958 Oakland Place, Minnetonka MN 55305. The email address is fireproofbooks@gmail.com.
The telephone number is 612-817-8993. Authorized representatives of the company
are Mark Larson and William Stevens.


Shipping costs are based on books weighing 2.0 LB or less. If your book order is heavy or oversized, we may contact you to let you know extra shipping is required.