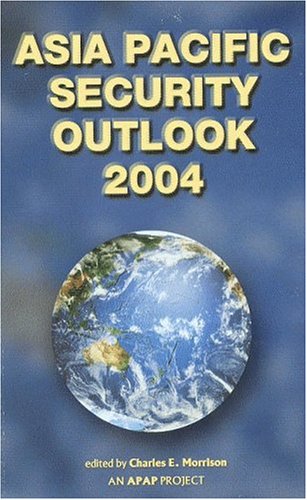 this softcover is in brand new condition. Seller Inventory # ABE-515424260

An event outside the Asia Pacific region —the U.S. led invasion of Iraq —was the single most important development in 2003 affecting the security outlook and perceptions in Asia Pacific. This was due to the central role of U.S. power and policy in the security atmosphere of this region, as well as to the widespread criticism and opposition engendered in the region by the U.S. action. Simultaneously, a serious crisis on the Korean peninsula and renewed terrorist attacks in Southeast Asia reminded countries of the interconnectedness of security and the rapidity with which threats such as proliferation and terrorism —as well as nontraditional threats such as epidemic diseases —can spread to and affect any country. The more encouraging side of the regional security outlook, however, is that, in part in response to the various common challenges, common purpose and practical cooperation both at the major power level and among the smaller states are probably more apparent now than at any time in the previous 50 years. China's growing role and responsible conduct are particularly noteworthy, as is the healthy state of the U.S.-Chinese relationship. The Asia Pacific Security Outlook, now in its eighth annual edition, provides assessments of the security environment, defense issues, and regional and global cooperation from the perspectives of countries that participate in the ASEAN Regional Forum. This 2004 edition presents theme-oriented essays on major subregional problems: the North Korean nuclear threat in Northeast Asia, terrorism in Southeast Asia, and the search for paths to peace in South Asia. Based on the work and expertise of a multinational team of security analysts and written for generalists and specialists alike, the Outlook is the most concise and authentic comparative work in this field.