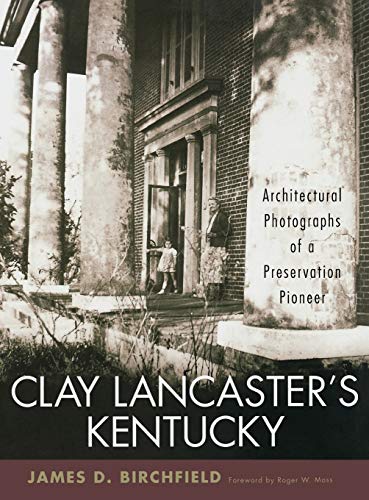 Quantity: 1
View all  copies of this book
Buy Used
Price: US$ 35.40 Convert Currency
Shipping: US$ 5.00 Within U.S.A. Destination, rates & speeds
Add to basket

"Clay Lancaster was infected by a love of architecture at an early age, a gentle madness from which he never cared to recover."―From the Foreword, by Roger W. Moss

It is easy to take for granted the visual environment that we inhabit. Familiarity with routes of travel and places of work or leisure leads to indifference, and we fail to notice incremental changes. When a dilapidated building is eliminated by new development, it is forgotten as soon as its replacement becomes a part of our daily landscape. When an addition is grafted onto the shell of a house fallen out of fashion or function, onlookers might notice at first, but the memory of its original form is eventually lost. Also forgotten is the use a building once served. From historic homes to livestock barns, each structure holds a place in the community and can tell us as much about its citizens as their portraits and memoirs. Such is the vital yet intangible role that architecture plays in our collective memory.

Clay Lancaster (1917-2000) began during the Great Depression to document and to encourage the preservation of America's architectural patrimony. He was a pioneer of American historic preservation before the movement had a name. Although he established himself as an expert on Brooklyn brownstones and California bungalows, the nationally known architectural historian also spent four decades photographing architecture in his native Kentucky. Lancaster did not consider himself a photographer. His equipment consisted of nothing more complex than a handheld camera, and his images were only meant for his own personal use in documenting memorable and endangered structures. He had the eye of an artist, however, and recognized the importance of vernacular architecture.

The more than 150 duotone photographs in Clay Lancaster's Kentucky preserve the beauty of commonplace buildings as well as historic mansions and monuments. With insightful commentary by James D. Birchfield about the photographs and about Lancaster's work in Kentucky, the book documents the many buildings and architectural treasures―both existing and long gone―whose images and stories remain a valuable part of the state's heritage.

James D. Birchfield, curator of rare books at the University of Kentucky, is former president of the Warwick Foundation, which promotes the Clay Lancaster legacy through education, preservation, and facilitation of cross-cultural understanding.

Clay Lancaster, an architectural historian and native Kentuckian, was known for his work on nineteenth and twentieth-century American architecture. After earning bachelor's and master's degrees at the University of Kentucky, he did post-graduate work at Columbia University, New York University, and the Asia Institute, where he established himself as an outspoken advocate of historical preservation. Also a writer and teacher, Lancaster published several books on architecture and art in addition to lecturing across the country. Lancaster returned to Kentucky in 1978 to continue his work and remained there until his death in 2000.