Items related to Interwoven Destinies: Cities and the Nation 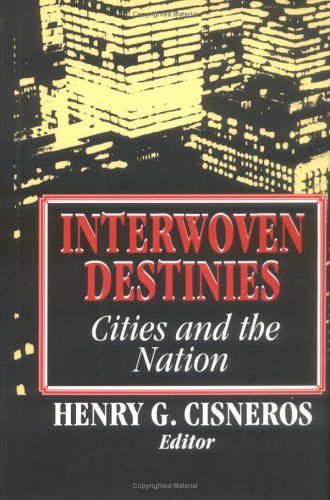 Interwoven Destinies: Cities and the Nation

Urban experts survey the crisis in our cities--in 13 essays and a series of recommendations that emphasize the interwoven destinies of city and suburb, city and nation. The text is drawn from a symposium led by Cisneros (former San Antonio mayor and now Clinton's secretary of housing and urban development), who offers an introduction. The contributors generally agree that our cities can't cope alone with the problems that have been concentrated within their borders: poverty, distressed families, unemployment, undereducation, racism, insufficient affordable housing, ghetto health statistics at Third World levels, crime, drugs, an overburdened justice system--and a consequent widespread breakdown of civility and trust. There's general recognition that federal policies since WW II have combined with other forces to drain the cities of revenue and burden them with more than their fair share of expenses--and that some adjustment, such as metropolitan-area- wide tax collection and redistribution, is necessary to redress the imbalance. The point is made repeatedly that the fortunes of metropolitan areas rise and fall with the fortunes of their central cities. Individual essays range from conservative sermonizing and civic cheerleading to a blizzard of census statistics and a community organizer's prescription for creative and realistic neighborhood advocacy as taught by the Industrial Area Foundation (founded 50 years ago by Saul Alinski). Nearly all the essays are thoughtful and authoritative. The recommendations--long on ``should's'' and short on ``how's''--are on the order of region- wide planning and taxing structures, with heavy investment in ``human capital'' (schools and job training), public transportation, and urban development. The value here isn't so much for new ideas and directions or detailed blueprints as for the informed overview and validation of the policy position: that both justice and national survival require a leveling of the playing field between ailing cities and parasitic suburbs. -- Copyright ©1993, Kirkus Associates, LP. All rights reserved.