Items related to Why They Don't Hate Us: Lifting The Veil On The...

Home Levine, Mark Why They Don't Hate Us: Lifting The Veil On The Axis Of Evil
Stock Image 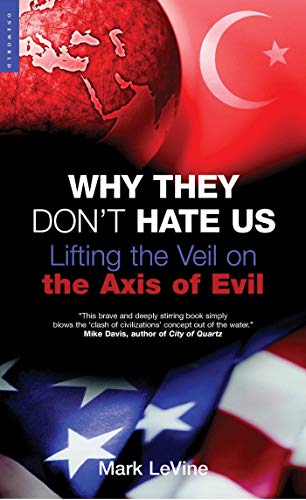 Why They Don't Hate Us: Lifting The Veil On The Axis Of Evil

Quantity: 1
View all  copies of this book
Buy Used
Price: US$ 20.00 Convert Currency
Shipping: US$ 4.00 Within U.S.A. Destination, rates & speeds
Add to basket

Title: Why They Don't Hate Us: Lifting The Veil On ...

This is a ground-breaking exploration of the roots of the current conflict between the US and the Muslim world.

On the 11th September 2001, a clash of civilisations that had been brewing for decades finally erupted, splitting the world in two. On one side, the forces of good, a coalition of the willing committed to promoting liberty and combating terror wherever it appears. On the other, the Axis of Evil, an unholy alliance of religious extremists who hate freedom and are prepared to go to any lengths to suppress it. United only by their mutual hatred and incomprehension, the West and the Muslim world can never be reconciled with one another. The end of history has come, and it is time to choose sides. You’re either with us, or you’re against us.

Or at least, that’s what they want you to think...

Scholar, journalist, activist and musician Mark LeVine tells a different story. Drawn from a decade of research in eight languages across a dozen countries, Why They Don’t Hate Us is the true story of how globalization has impacted on real people across the Muslim world, from young headscarf-clad feminists to terrorist intellectuals, to rock bands willing to risk arrest and torture to play their music.

In a powerful and compelling study based on the most detailed analysis ever offered of cultural and economic globalization in the Middle East and North Africa, Professor LeVine launches a searing attack on the assumptions and prejudices that have long been taken for granted by both liberals and conservatives. There is no single amorphous ‘they’ – Muslims are every bit as diverse and contradictory as westerners – but this idea has allowed fundamentalists on both sides to exert control over their respective societies. The real barrier to greater understanding between the West and the Muslim world is not the ‘axis of evil’; it is the ‘axis of arrogance and ignorance’ that has infected commentators and policy makers across the political spectrum.

Part-history, part-economic treatise and part-travelogue, this ambitious and frequently entertaining work should be read by anyone who has asked themselves the familiar question "why do they hate us?" and wondered "what if they don’t?"

Mark LeVine is Associate Professor of Modern Middle Eastern History, Culture and Islamic Studies at the University of California, Irvine. For most of the last decade he has lived and worked in the Middle East, dodging terrorist bombs, standing against bulldozers and sharing the lives of the people who form the subject of his work. Historical consultant for the Oscar-nominated and double Emmy award-winning Promises documentary and a leading figure in the influential ‘culture jam’ movement, he has been extensively quoted in leading magazines and newspapers including the New York Times and Washington Post, and has made numerous television and radio appearances debating Middle East history and politics. He is also the author of Overthrowing Geography: Jaffa, Tel Aviv and the Struggle for Palestine 1880-1848 and co-editor of Twilight of Evil: Responses to Occupation.