Items related to Foley Is Good: And the Real World Is Faker Than Wrestling

Home Foley, Mick Foley Is Good: And the Real World Is Faker Than Wrestling
Stock Image 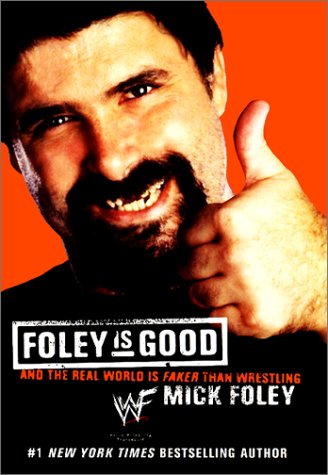 Foley Is Good: And the Real World Is Faker Than Wrestling

Quantity: 1
View all  copies of this book
Buy Used
Price: US$ 28.16 Convert Currency
Shipping: US$ 4.79 From Canada to U.S.A. Destination, rates & speeds
Add to basket

French version. Clean over all with no marks folds or highlights inside. nearly in as new condition. signed at the first endpaper by Mick Foley.- We ship from Canada. Specializing in academic, collectible and historically significant, providing the utmost quality and customer service satisfaction. For any questions feel free to email us. Seller Inventory # 22625

Title: Foley Is Good: And the Real World Is Faker ...

Synopsis: Chapter OneHe's Back.And you won't believe what he has to say this time.

Some people might think that World Wrestling Federation Superstar Mick Foley said his piece in his 532-page, number one New York Times bestselling literary opus Have a Nice Day! Well, some people would be wrong. Very wrong. Because Mick Foley is back with a vengeance.

Foley Is Good picks up right where the last book left off, as once again readers are given a bird's-eye view of the behind-the-scenes action in the World Wrestling Federation. With the same total honesty and riotous humor displayed in his last book, Mick shines a spotlight into some of the hidden corners of the World Wrestling Federation. From the ongoing controversy surrounding "backyard wrestling" to the real story behind his now-infamous I Quit" match with The Rock, Foley covers all the bases in this hysterically funny roller-coaster ride of a memoir.

Some know him as Cactus Jack, others as Dude Love. We loved him as Mankind, and he was the best Commissioner the World Wrestling Federation ever had. But if you want to know the real Mick Foley, if you want to get inside the head of one of sportsentertainment's biggest Superstars, then there's no substitute for Foley Is Good. Readers and fans everywhere need their recommended daily allowance of pure, unadulterated Mick. And it's all right here for the taking.

Not only is gap-toothed Mick Foley a heavy character in the World Wrestling Federation, he is the undisputed literary champion of the wrestling bestseller. It's amazing that there is such a thing as a "wrestling bestseller," and that fact owes largely to the No. 1 bestselling success of Foley's first book, Have a Nice Day! Now he's back with another memoir, Foley Is Good: And the Real World Is Faker Than Wrestling, and fans will not be disappointed by the jokes, the jibes at fellow WWF arm-twisters, and the genial charm of the literary behemoth of our time.