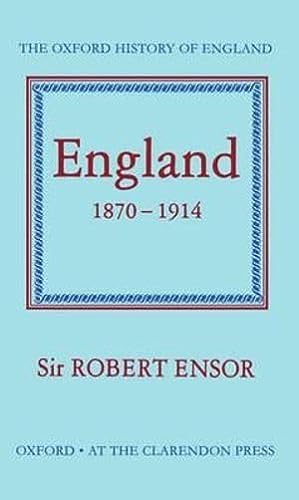 Quantity: 1
View all  copies of this book
Buy Used
Price: US$ 11.24 Convert Currency
Shipping: US$ 12.61 From United Kingdom to U.S.A. Destination, rates & speeds
Add to basket

First published in 1936, this now-classic volume spans a time of rapid and far-reaching change in England--from Gladstone's first ministry, through the great contest with Disraeli, the Home Rule debate, the establishment of the Labour moverment, the Boer War, and the Liberal reforms of 1909-10, to the end of an era marked by the catastrophe of 1914. With stimulating analyses of social and economic developments as well as domestic and foreign policy, Ensor's account serves as a superb introduction to the period it covers and offers insight into the world of the 1930s in which it was written.

The date at which this volume ends, the outbreak of the European War, is the latest for which there is enough documentary evidence to write English history scientifically.When the guns of the Franco-Prussian war first thundered in earnest on 4 August 1870 a new epoch began, although Europe at the time did not know it. At midnight of the same day just forty-four years later the sands of Great Britain's ultimatum to Germany ran out; and with them the epoch ended. It is the task of the present volume to trace the history of England during these forty-four years.