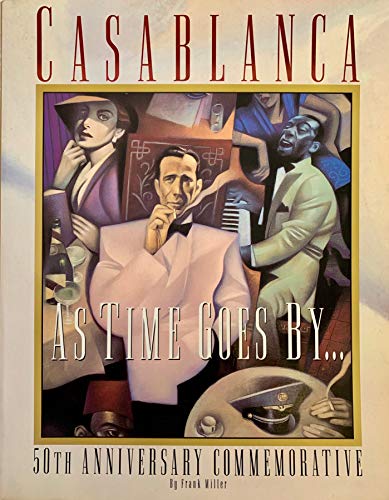 this large softcover is in good condition no rips or stains but has gift statement inside the cover. Seller Inventory # ABE-461866018

Presents the story of the classic motion picture, including casting, writing, shooting, and post-production, and describes changes and lucky breaks that helped to make it an all-time favorite

Like Jeff Siegel's forthcoming "Casablanca" Companion ( LJ 5/1/92), this publication marks the 50th anniversary of a beautiful friendship between the famous Warner Brothers film and the worldwide movie-going public. Siegel and Miller both offer the standard data on the film ' s rather unusual production, as well as a good deal of biographical information on cast and crew. Though both texts cover essentially the same material, Miller's is richer in detail and includes production stills and behind-the-scenes photos, some never seen before, which make it a book no self-respecting Casablanca fan would want to be without. On the other hand, Siegel's paperback costs only $9.95, worthwhile if your budget can't handle Miller's higher price tag. For libraries that can afford it, Miller's hardcover gives the film the red-carpet treatment it deserves.
- Michael Rogers, "Library Journal"
Copyright 1992 Reed Business Information, Inc.