Items related to The Lampfish of Twill 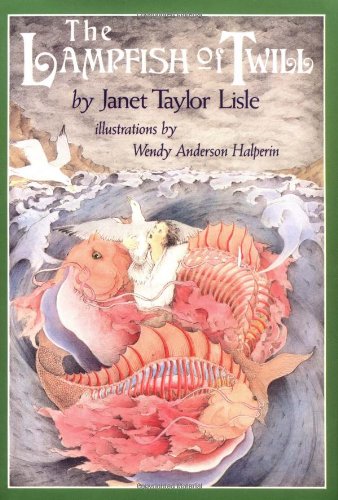 Quantity: 1
View all  copies of this book
Buy Used
Price: US$ 4.99 Convert Currency
Shipping: US$ 3.79 Within U.S.A. Destination, rates & speeds
Add to basket

Title: The Lampfish of Twill

An old fisherman leads Eric down a whirlpool to an ancient and beautiful world in the core of the Earth.

Each of Lisle's books has been fresh, creative, and unlike its predecessors. In Afternoon of the Elves (Newbery Honor, 1990), grim reality was mitigated by a courageous child's imagination; here, fantastical creatures help convey truths that transcend the harsh realities of a world whose rituals and prejudices are all too familiar. Eric and Gullstone, the pet gull the boy keeps on a tether, live with dour Aunt Opal; as is common in their village, Eric's parents were lost at sea in one of the treacherous whirlpools. His ambition is to spear a lampfish--a magnificent, luminous creature, treasured for its bones but dangerous to catch. Before he gets his chance, he encounters old Zeke Cantrip, survivor of the most dreaded ``spout''; Cantrip's mission is to save the fish, whose beauty speaks so eloquently to Eric that he is horrified next time he witnesses the lampfish hunt's customary brutality. Cantrip takes him down the spout to ``Underwhirl,'' a paradisiacal world to which the lampfish are guides. The perilous journey home is made with the help of Gullstone, now free from Eric's protective custody. Eric himself is changed forever: like Cantrip, he has gained wisdom but become an outsider. In lyrical prose with frequent dashes of humor, an intriguing, fully realized allegorical world with vivid characters, a colorful special vocabulary--and the beguiling fish, who also appear in many of Halperin's excellent drawings. A splendid, unique fantasy. (Fiction. 10+) -- Copyright ©1991, Kirkus Associates, LP. All rights reserved.