Items related to The Lost Spy: An American in Stalin's Secret Service 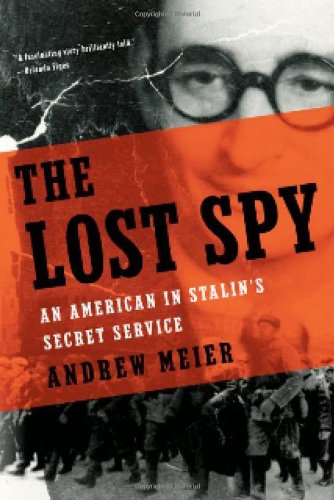 The Lost Spy: An American in Stalin's Secret Service

Title: The Lost Spy: An American in Stalin's Secret...

Filled with dramatic revelations, The Lost Spy may be the most important American spy story to come along in a generation.

For half a century, the case of Isaiah Oggins, a 1920s New York intellectual brutally murdered in 1947 on Stalin's orders, remained hidden in the secret files of the KGB and the FBI―a footnote buried in the rubble of the Cold War. Then, in 1992, it surfaced briefly, when Boris Yeltsin handed over a deeply censored dossier to the White House. The Lost Spy at last reveals the truth: Oggins was one of the first Americans to spy for the Soviets.Based on six years of international sleuthing, The Lost Spy traces Oggins's rise in beguiling detail―a brilliant Columbia University graduate sent to run a safe house in Berlin and spy on the Romanovs in Paris and the Japanese in Manchuria―and his fall: death by poisoning in a KGB laboratory. As harrowing as Darkness at Noon and as tragic as Dr. Zhivago, The Lost Spy is one of the great nonfiction detective stories of our time. About the Author:

Andrew Meier, the author of Black Earth: A Journey Through Russia After the Fall, is a recent Fellow at the New York Public Library’s Cullman Center for Scholars & Writers and currently a writer-in-residence at the New School University. He lives in New York City.