Items related to Women of the Air - the Remarkable Story of the Women...

Home Lomax, Judy Women of the Air - the Remarkable Story of the Women who ...
Stock Image 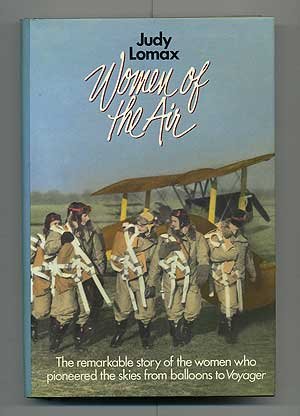 Quantity: 1
View all  copies of this book
Buy Used
Price: US$ 25.95 Convert Currency
Shipping: US$ 6.00 From Canada to U.S.A. Destination, rates & speeds
Add to basket

Title: Women of the Air - the Remarkable Story of ...

Traces the history of women pilots, describes record-setting flights, and looks at the role of women pilots during World War II and in modern commercial aviation

To the many other fields in which the role of women has been ignored or played down, add what is called "manned" flight. British pilot Lomax does a praiseworthy job here of showing that females were as airborne as males right from the start. Readers learn that a woman flew as a balloon passenger in 1784, another parachuted from a balloon in 1815, yet another was the first female airplane passenger in 1909, and the first female pilot was licensed in France in 1910. Also eye-opening are the tales of female wing-walkers in America and the "flying aristocrats" in Britain during the 1920s. And there are accounts of Amelia Earhart, Jacqueline Cochran, Jacqueline Auriol and so on to Valentina Tereshkova and Sally Ride, the first women in space, and Jeana Yeager, the record-setter in 1986 for nonstop, round-the-world flight. Photos not seen by PW.
Copyright 1987 Reed Business Information, Inc.