Items related to Conservative Parties, the Right, and Democracy in Latin... 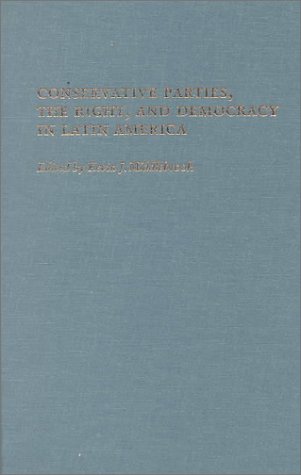 Conservative Parties, the Right, and Democracy in Latin America

Title: Conservative Parties, the Right, and ...

Under what conditions do political institutions develop that are capable of promoting economic and social elites' accommodation to democracy? The importance of this question for research on regime change and democracy in Latin America lies in two established political facts: alliances between upper-class groups and the armed forces have historically been a major cause of military intervention in the region, and countries with electorally viable national conservative parties have experienced significantly longer periods of democratic governance since the 1920s and 1930s than have countries with weak conservative parties.

The contributors to this book examine the relationship between the Right and democracy in Argentina, Brazil, Chile, Colombia, El Salvador, Peru, and Venezuela during the 1980s and 1990s. The authors focus particularly on the challenges that democratization may pose to upper-class groups; the political role of conservative parties and their electoral performance during these two crucial decades; and the relationships among conservative party strength or weakness, different modes of elite interest representation, and economic and social elites' support for political democracy. The volume includes a statistical appendix with data on conservative parties' electoral performance in national elections during the 1980s and 1990s in these seven countries.

Kevin J. Middlebrook is Director of Research at the Center for U.S.-Mexican Studies, University of California--San Diego. He is the author of The Paradox of Revolution: Labor, the State, and Authoritarianism in Mexico, also available from Johns Hopkins.