Items related to A Peculiar People: The Church As Culture in a Post-Christian...

Home Clapp, Rodney A Peculiar People: The Church As Culture in a Post-Christian ...
Stock Image 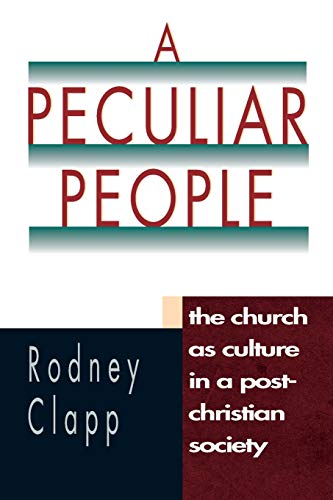 A Peculiar People: The Church As Culture in a Post-Christian Society

Title: A Peculiar People: The Church As Culture in ...

Synopsis: Christians feel increasingly useless, argues Rodney Clapp, not because we have nothing to offer a post-Christian society, but because we are trying to serve as "sponsoring chaplains" to a civilization that no longer sees Christianity as necessary to its existence. In our individualistic, technologically oriented, consumer-based culture, Christianity has become largely irrelevant. The solution is not to sentimentally capitulate to the way things are. Nor is it to retrench in an effort to regain power and influence as the sponsor of Western civilization. What is needed is for Christians to reclaim our heritage as a peculiar people, as unapologetic followers of the Way. Within the larger pluralistic world, we need to become a sanctified, subversive culture that develops Christian community as a truly alternative way of life. Christians must learn to live the story and not just to restate it. Writing inclusively with considerable verve, Clapp offers a keen analysis of the church and its ministry as we face a new millennium. About the Author:

Until spring 1999, Clapp was senior editor for academic and general books at InterVarsity Press. He was formerly an associate editor for Christianity Today, and he has served on the editorial boards of The Journal of Family Ministry and Marriage Partnership. His essays have appeared in a variety of publications, including Christianity Today, Regeneration Quarterly and Books and Culture. Clapp is now an editor with Brazos Press, a new imprint of Baker Book House.