Items related to Going Gray: What I Learned About Beauty, Sex, Work,... 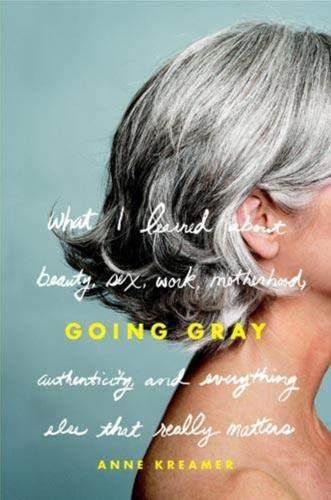 Going Gray: What I Learned About Beauty, Sex, Work, Motherhood, Authenticity, and Everything Else That Really Matters

Quantity: 1
View all  copies of this book
Buy Used
Price: US$ 6.00 Convert Currency
Shipping: US$ 5.00 Within U.S.A. Destination, rates & speeds
Add to basket

Title: Going Gray: What I Learned About Beauty, Sex...

Anne Kreamer considered herself a youthful 49 until a photo of herself with her teenage daughter stopped her in her tracks. In one unguarded moment she saw herself for what she really was -- a middle-aged woman with her hair dyed much too harshly. In that one moment Kreamer realized that she wasn't fooling anyone about her age and decided it was time to get real and embrace a more authentic life. She set out for herself a program to let her hair become its true color, and along the way discovered her true self.
Going Gray is Kreamer's exploration of that experience, and a frank, warm and funny investigation of aging as a female obsession. Through interviews, field experiments, and her own everywoman's chronicle, Kreamer probes the issues behind two of the biggest fears aging women face: Can I be sexually attractive as a gray-haired, middle-aged woman? and Will I be discriminated against in the work world? Her answers will surprise you.
In searching for the balance between attractiveness and authenticity, Kreamer's journey of middle-aging illiminates in a friendly, useful, and entertaining way the politics and personal costs of this generation's definition of "aging gracefully.

Anne Kreamer is the former executive vice-president and worldwide creative director of Nickelodeon/Nick at Nite, and a co-founder of SPY magazine. She currently writes a monthly column for Martha Stewart Living and is a former columnist for Fast Company. Kreamer lives in Brooklyn with her husband, novelist and journalist Kurt Andersen, and her two daughters.