Home edited by michael leach and therese j. borchard i like being catholic
Stock Image 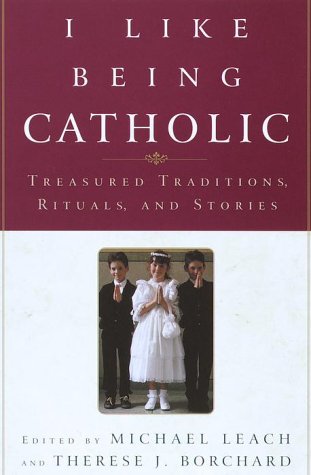 Quantity: 1
View all  copies of this book
Buy Used
Price: US$ 16.00 Convert Currency
Shipping: US$ 4.00 Within U.S.A. Destination, rates & speeds
Add to basket

A celebration of the treasured traditions, rituals, and stories that run through the bloodstream of American Catholics

For Andrew Greeley, it is the reverence of Christmas night and the exultation of Easter morn. Martin Scorsese, like many others, remains grateful for the nuns who rapped his knuckles but built his self-esteem. Mary Gordon recalls the sense of lightness that follows confession; Vince Lombardi, the strength he derived from Mass; and Christopher Buckley, the role St. Thomas More plays in his writing.

I Like Being Catholic brings together the memories, thought, and hopes of famous Catholics and ordinary parishioners, lapsed and "good-enough" Catholics, and those who have devoted their lives to the faith. It captures their abiding ties to and deep affection for the Church and offers the wide-ranging, sometimes surprising views on the good things that come with being Catholic.

This is not a book of theology. It is about the beauty at the heart of Catholicism. It is about what Teilhard de Chardin called "the chosen part of things." It is about family and community, the value of Catholic education, the significance of sacraments and milestones, and the cultural impact of Catholicism—there are lists of the ten best Catholic novels, the ten best Catholic movies, ten Catholic heroes of the twentieth century, ten good reasons to raise your kids Catholic, fifty things Catholics like best about being Catholic, and much more ...

I Like Being Catholic is a book for all those who have ever called themselves Catholic. It is a book of warmth, affection, humor, and love.

I Like Being Catholic is sure to rank among the top-10 first Communion gifts in coming years. It's a collection of personal essays, prayers, quotations, and other short writings by everyone from Cokie Roberts to Martin Scorsese to William F. Buckley about the pleasures of practicing Catholicism. As editors Michael Leach and Therese J. Borchard write in their introduction to the volume, the anthology's contributors "may not always agree with the Church's rules but they wouldn't think of being anything else. Catholicism is in their bones." I Like Being Catholic is not concerned with theology; it's out to show the ways that Catholicism enables faithful folk to see the true and beautiful. This approach occasionally lapses into kitsch ("Fifty Things Catholics Like Best About Being Catholic," compiled by Fr. William A. Burke from parishioners in Homewood, Illinois: e.g., "22. Ashes smudged on your forehead."). It also creates some occasions for readers to enjoy the divine presence in unexpected places (as suggested by Doris Kearns Goodwin's "The Brooklyn Dodgers and The Catholic Church").