Items related to The Riverkeepers: Two Activists Fight to Reclaim Our... 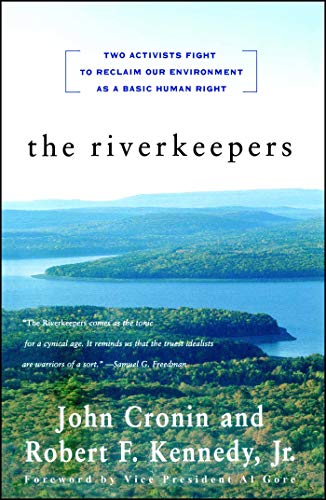 The Riverkeepers: Two Activists Fight to Reclaim Our Environment As a Basic Human Right

this trade pb is in good condition no rips or markings or stains. Seller Inventory # ABE-345811034

A modern-day David and Goliath tale, The Riverkeepers is an impassioned firsthand account by two advocates who have taken on powerful corporate and government polluters to win back the Hudson River. John Cronin and Robert F. Kennedy, Jr., tell us how we too can fight for our fundamental right to enjoy our invaluable natural resources.
Revealing shocking stories of commonplace environmental crime -- from drinking water tainted with hospital waste to fish populations contaminated by freely dumped PCBs -- Cronin and Kennedy describe their dramatic confrontations with more than ninety environmental lawbreakers. The Riverkeepers is a timely call to action that will resonate across America as the backlash spearheaded by congressional leaders and their major corporate allies threatens to reverse the hard-won victories in environmental law and policy.

In the 1960s the Hudson River, under threat from polluters and energy concerns but beloved by its shoreline residents and local fishermen, became one of the United States' first major environmental battlegrounds. Out of those early legal wrangles emerged some important environmental legislation, and also the Soundkeeper organization, with a mandate to fight for the health of this historic New York river.

This book reveals something about the organization, and even more about the history of the Hudson and environmentalism in America, from John Winthrop to Newt Gingrich, and quite a bit, too, about the upbringings--glamorous (who'd have thought keeping a pet seal in your swimming pool would lead to activism?) and not-so-unusual--of its authors. Promising early chapters sketch out the exploitation of the river by industry and describe some of its colorful champions. (One of the most interesting here is Robert H. Boyle, the writer of a seminal account of the Hudson, The Hudson River: A Natural and Unnatural History, who comes off as a hero.) A terrific final section explains in accessible terms the basis for environmental law in the founding of our country. In between, this book sometimes falters under the weight of too much information. You can't fault these writers for the work they've done, or for the scattered gems of thoughtful information on the modern environmental movement, which make this book worth reading. Just be prepared to pick through some irrelevancies (did Bobby Shriver really bring a leopard tortoise home for Robert Kennedy Jr. from Kenya in a suitcase?) to get to the heart of this unusual book. --Maria Dolan