Items related to Funny Cide: How a horse, a trainer, a jockey, and a...

Home The Funny Cide Team Funny Cide: How a horse, a trainer, a jockey, and a bunch of ...
Stock Image 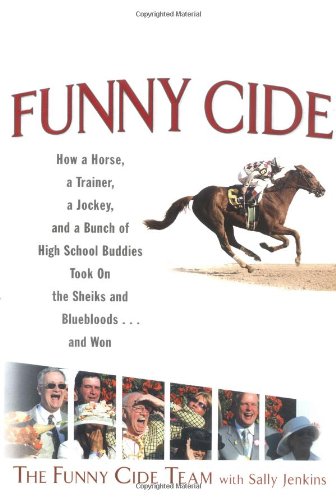 Funny Cide: How a horse, a trainer, a jockey, and a bunch of high school buddies took on the sheiks and blue bloods . and won

Quantity: 1
View all  copies of this book
Buy Used
Price: US$ 225.00 Convert Currency
Shipping: US$ 5.00 Within U.S.A. Destination, rates & speeds
Add to basket

Title: Funny Cide: How a horse, a trainer, a jockey...

Describes how an unheralded New York horse--trained by a journeyman, ridden by a hard-luck jockey, and owned by a tiny stable founded by a group of high-school buddies from Sackets Harbor--beat the champions and their multimillionaire owners to sweep to the brink of the Triple Crown. 250,000 first printing.

It sounds like a Hollywood movie script. In 2003, an unknown gelding named Funny Cide came out of nowhere to win both the Kentucky Derby and the Preakness, shocking the horseracing establishment and thrilling racing fans around the world. It wasn't just the horse that was so unusual, but the entire team: the owners were ten businessmen and laborers, six of which were childhood friends from a tiny New York town, with much more enthusiasm than experience; the trainer was a capable veteran of 30 years who, despite his skill, had endured a long series of disappointments; and the jockey, a battered 42-year-old who had "been up and down so many times, he needed a seasick remedy," had tasted victory before, but never expected it to come again. How such a group made it to the winner's circle is a touching and exhilarating story that Sally Jenkins, co-author of Lance Armstrong's It's not About the Bike, conveys with warmth and excitement. Along with inside information about the peculiarities of breeding and raising horses and the background on Funny Cide's owners, trainers, and jockey, Jenkins offers entertaining insight into the culture of horseracing. In particular, she makes much of the collision between Funny Cide's middle class owners and the rich bluebloods who dominate the sport. She notes with obvious pleasure how they traveled by yellow school bus rather than in expensive cars or limousines and how they couldn't even find the winner's circle at the Derby. She also shows how their original underdog status also worked wonders for the sport by captivating the public and providing a classic long-odds story that is hard to resist. Funny Cide captures this spirit well making it an enjoyable read from start to finish. --Shawn Carkonen