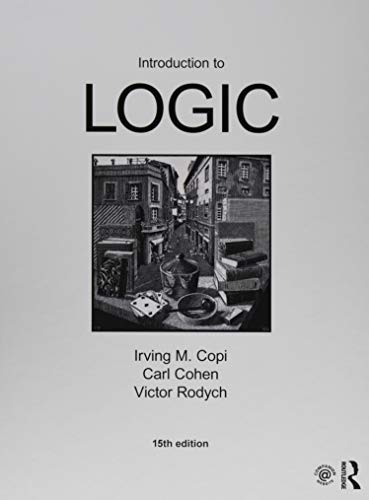 For more than six decades, and for thousands of students, Introduction to Logic has been the gold standard in introductory logic texts. In this fifteenth edition, Carl Cohen and Victor Rodych update Irving M. Copi’s classic text, improving on its many strengths and introducing new and helpful material that will greatly assist both students and instructors.

In particular, chapters 1, 8, and 9 have been greatly enhanced without disturbing the book’s clear and gradual pedagogical approach.

Irving M. Copi was a logician who studied under Bertrand Russell while at the University of Chicago. He held appointments at, among other institutions, Princeton University, the University of Michigan, and the University of Hawaii at Manoa. Among the books he published before his death in 2002 was The Theory of Logical Types (Routledge, 1971).

Carl Cohen is the Senior Faculty Member in the Department of Philosophy at the University of Michigan, having taught at this university since 1955. Among his many published books is his account of the battle over affirmative action at the University of Michigan, A Conflict of Principles (2014). His most recent book is a concise philosophical rejection of all forms of race preference, Both Wrong and Bad (2018).

Book Description Condition: New. Brand New Paperback International Edition.We Ship to PO BOX Address also. EXPEDITED shipping option also available for faster delivery.This item may ship from the US or other locations in India depending on your location and availability. Seller Inventory # ABBUS-69805

Book Description Condition: New. Brand New Paperback International Edition.We Ship to PO BOX Address also. EXPEDITED shipping option also available for faster delivery.This item may ship from the US or other locations in India depending on your location and availability. Seller Inventory # ABBUS-12101

Book Description Hardcover. Condition: Acceptable. Assume it may have one of the following conditions; Light water staining/damage, but not enough to affect the usage of the book, a cover that has been taped or repaired, repaired binding and/or highlighting and annotations throughout, but the book will get you through a term. If you are a picky buyer you probably want to look for a more expensive book. All of our books come with a 30 day, money back guarantee. Item does not include any supplemental items such as access codes, discs, etc. Order ships quickly! 9781138500860 C 1/12/21. Seller Inventory # 7M-VEXI-W11N

Book Description Condition: Good. A+ Customer service! Satisfaction Guaranteed! Book is in Used-Good condition. Pages and cover are clean and intact. Used items may not include supplementary materials such as CDs or access codes. May show signs of minor shelf wear and contain limited notes and highlighting. Seller Inventory # 1138500860-2-4

There are 16 more copies of this book