Items related to The Day The Martians Came 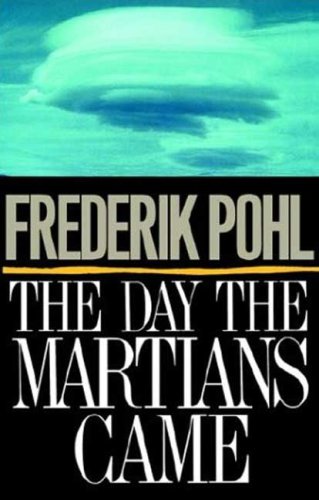 The Day The Martians Came

Quantity: 1
View all  copies of this book
Buy Used
Price: US$ 3.00 Convert Currency
Shipping: US$ 2.00 Within U.S.A. Destination, rates & speeds
Add to basket

Connecting readers with great books since 1972! Used books may not include companion materials, and may have some shelf wear or limited writing. We ship orders daily and Customer Service is our top priority!. Seller Inventory # S_341968576

Title: The Day The Martians Came

Henry Steegman is hardly "Mr. Personality" aboard the Mars-bound Algonquin 9. Yet it is he who bungles upon the spectacular Macy's-like city beneath the Red Planet's crust. For better or worse, the name Steegman will be immortalized by a discovery that will transform millions of lives. For a struggling screenwriter, the Martian beings could mean a big story, big bucks, headlines...and more women than any many his size has ever known... For an exhiled Russian rocket man, the are a possible route to America's space program, and the land of opportunity... For a flying-saucer faker of flickering fame, the possibilities are out of this world. In a brilliant near-future look at the human condition, Frederick Pohl has honed his satire-sharp science fiction to a steely new edge.

Frederik Pohl has won all the major awards in the field of science fiction, including three Hugo Awards, two Nebula Awards, both for Best Novel; the John W. Campbell Memorial Award, also for Best Novel; he was accorded the accolade of Grand Master by the Science Fiction Writers of America. He's also won three Hugo awards as editor of the best magazine. He edited the groundbreaking Star Science Fiction series of original-story anthologies. He and his wife, educator and political activist Elizabeth Anne Hull, live in Palatine, Illinois.