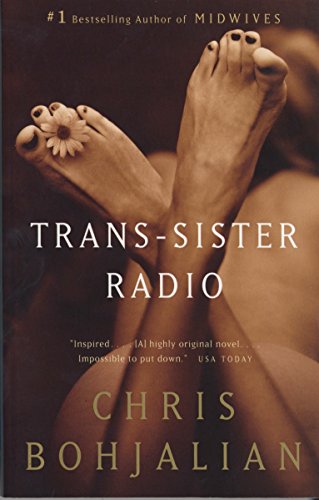 From the bestselling author of Midwives comes a thought-provoking story about gender, love, and new relationships.

When Allison Banks develops a crush on Dana Stevens, she knows that he will give her what she needs most: attention, gentleness, kindness, passion. Her daughter, Carly, enthusiastically witnesses the change in her mother. But then a few months into their relationship, Dana tells Allison his secret: he has always been certain that he is a woman born into the wrong skin, and soon he will have a sex-change operation. Allison, overwhelmed by the depth of her passion, finds herself unable to leave Dana. By deciding to stay, she finds she must confront questions most people never even consider. Not only will her own life and Carly’ s be irrevocably changed, she will have to contend with the outrage of a small Vermont community and come to terms with her lover’s new body–hoping against hope that her love will transcend the physical.

This sympathetic novel about the effect of a sex change on a romantic relationship, a family, and a community could almost be sold as a textbook--a kind of transgender Guide to the Perplexed. With its calming tone and scrupulous sensitivity to the feelings of all involved, it sometimes reads like a textbook, too. But while nobody is likely to launch a protest campaign over the cautious revelations of Trans-sister Radio, that's precisely the subject of Chris Bohjalian's seventh novel, in which a male college professor in a small Vermont town transforms himself into a woman. Even Dana Stevens's initial step in this direction--donning women's clothing--elicits a powerful reaction from the community.

And what about Dana's new girlfriend Allie Banks, a beloved local schoolteacher who fell in love with him before learning of his plan? Her initial instinct is to end the relationship. Then she decides to stand by Dana, inspired rather than daunted by her stuffy ex-husband Will's opposition to the "effeminate" guy she's dating, and by the horrified reactions of the parents at her school. She does, it's true, continue to love Dana after the sex reassignment surgery. And she stoically endures the threatening notes in her school mailbox and the crude graffiti on her front door, as well as the minor vindication of a local public radio story on their battle. Yet Allie never makes the emotional shift from heterosexual woman to lesbian. Breaking off the affair, she spends months mourning the man she had fallen in love with.

Assuming, as we are meant to, that Dana is outwardly becoming the person she always was inside--that biology is anything but destiny--there's only one character who undergoes a profound change over the course of the novel. That would be Will, Allie's ex-husband, who recoils from Dana's initial sexual ambiguity. After her surgery, however, he finds himself increasingly aware of her as a woman.

And so when I'd hug Dana or touch the inside of her palm with the inside of mine (a handshake, yet so suggestive) or my fingers would find their way to one of her arms, I would experience a sexual ripple and wonder why I had felt such a thing--why I had courted such a thing. And the answer would be because she was pretty and she was smart and she was feminine.

Structuring his story around the transcript of a fictional National Public Radio feature on transgender, Bohjalian shifts the point of view with every chapter: the characters often seem to be enlarging on comments they had made for broadcast. We hear from Dana, Allie, and Will in turn, as well as Carly, the daughter of the divorced couple. In this sense, Trans-sister Radio gives everyone equal time. And for good or ill, it has none of the bluster or transgressive charge of Gore Vidal's late-1960s bombshell, Myra Breckinridge. Instead it brings transgender home, rendering it (to quote Dana herself) "domestic as a balloon shade or a perennial garden. And just as harmless." --Regina Marler


We guarantee the condition of every book as it's described on the AbeBooks web sites. If you're dissatisfied with your purchase (Incorrect Book/Not as Described/Damaged) or if the order hasn't arrived, you're eligible for a refund within 30 days of the estimated delivery date. If you've changed your mind about a book that you've ordered, please use the Ask bookseller a question link to contact us and we'll respond within 2 business days. This does not affect your statutory consumer rights includ...